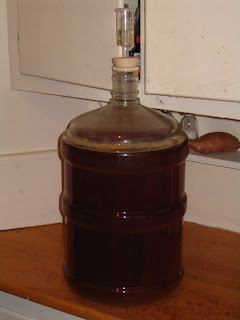 About a week ago a bottled my first sour beer that had been aged in a Better Bottle. It was the Temptation clone that Seth and I brewed back in November. First I'll say the aroma of the uncarbonated beer was outstanding, deliciously funky in that magical Russian River way.

The interesting thing is that the wild yeast and/or bacteria formed tiny little colonies all over the plastic, it was difficult to see when there was beer in there, but once it was emptied it was clear. My assumption is that the microbes are acting just like when they live in the oak of a barrel, scavenging the oxygen as it diffuses in.

I think it is very good sign for the viability of this method, and if the aroma of the beer is any indication this may be one of the best batches I have done so far. 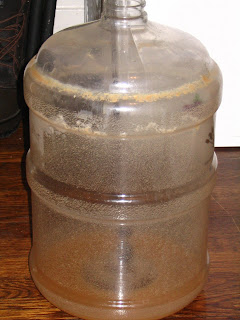 Don't expect a full tasting of this one for a few months, but it is going to be hard to wait too long before I crack one of these open.
The Mad Fermentationist (Mike) at 6:40 PM