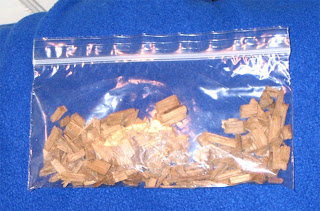 At this year's National Homebrew Conference Vinnie Cilurzo from Russian River gave a speech about brewing sour beers at home. Sadly, I didn't attend but between Basic Brewing Radio, The Brewing Network, and the BBB I got to listen to the speech, an interview with him, and read his slides. I won't go into the details except to say that Vinnie is a generous man who is essentially willing to give away almost all his secrets for the benefit of homebrewers.

In addition to the knowledge he gave out he also handed out small baggies of oak chips:

"The oak chips were used in Batch 23 Damnation, which was a beer that we made to celebrate the 23rd bottling of Damnation. After the oak chips were removed from the Batch 23 Damnation (no bugs or critters in the beer), I soaked them in four strains of Brett, as well as Lacto & Pedio and our house "wild" culture. They stayed soaking for 3 or 4 weeks before I removed them and dried sun dried them on the roof of our building. From there I bagged them up."
- Vinnie

Needless to say I was very excited when James from Basic Brewing Radio/Video offered to send me a bag of these gems to play with. Since they were already pushing 6 months old I decided I would give them some time to perk up in a starter before adding them to a full batch of already alcoholic beer. I made a starter just like I would have for any other beer (OG of 1.040), except that 25% of the volume came from an already fermented beer that I added at flameout (I wanted a bit of alcohol to help protect against any mold spores that may have landed on the chips as they dried). I also did not aerate as Pediococcus does not do well in the presence of oxygen. After just a few days there was a short burst of strong activity, followed by continued signs of activity (formation of a small pellicle, occasional bubbles in the airlock). I have no idea what grew, but I was assured that something was still alive and ready to start fermenting. 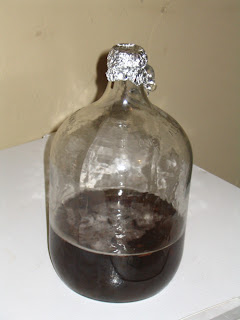 Once the starter had worked for a week I added some medium toast French oak cubes that I had boiled in several changes of water. I plan on drying these out after they have a few weeks to soak in the starter so I can save the bug blend for future beers.

The big advantage of this blend over say just using the dregs from a few bottles of Supplication is that it contains all of the microbes that Russian River uses while a bottle might contain only a small subset. As a funky beer ages it continues to get more alcoholic and the pH continues to drop, this will kill off some of the microbes that are active early in the fermentation. In particular Russian River has a large amount of Kloeckera apiculata in their barrel aged beers. Kloeckera is active early in the fermentation as it can ferment glucose, but not maltose. According to Wild Brews while Kloeckera can produce some interesting esters, they are too volatile to survive into the finished beer. On the other hand, Vinnie claims that “Our spontaneous fermented beers have a strong fruiting, floral, & citrus character, a trait exhibited by Kloeckera apiculata.” I'm not sure which one to believe, but I have never heard any negative aspects of it, so there is really no risk.

Since then I have added some of the starter and oak to a clone of Russian River's Temptation (a Belgian blond aged in chardonnay barrels with Brett), and I am planning on adding the rest to my Cable Car Clone.

It'll be awhile before I really know how well this blend does, but what I have heard from people who pitched the fresh oak into beers 6 months ago, I should expect a rich complex sour/funky beer.
The Mad Fermentationist (Mike) at 8:19 PM