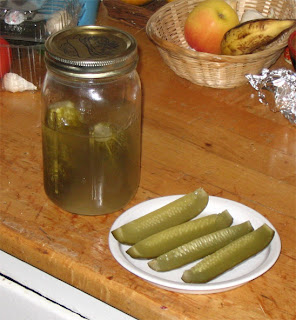 A tasting of my first attempt at Kosher Dill Pickles.

Appearance - Army green skin with a darker green interior than a commercial pickle. It is amazing how much the appearance changes, getting darker the older they get.

Aroma - A bit of sourness with some dill and garlic. Rather earthy, maybe coming from the pepper.

Taste - Lots of salt with some garlic in the finish. They are lightly tart, but certainly not as sour as many pickles. The sourness is lactic and tangy, not the sharp acetic (vinegar) character that I really dislike. They also have almost no sweetness unlike some commercial pickles.

Mouthfeel - Very crisp, great crunch and snap. I love salt, but here the salt asserts itself a bit too much, making it hard to eat these in quantity without an accompaniment.

Eatability/Notes - Pretty solid first attempt, they are getting saltier the longer they sit in the brine in the fridge. I'll definitely cut down on the salt for my next attempt and maybe even water the brine down further for storage in the refrigerator.
The Mad Fermentationist (Mike) at 7:43 PM