Kvass is a traditional Russian beverage made by soaking stale rye bread in warm water and then fermenting it (how thrifty). There isn't much fermentable sugar in this preparation so the ABV is only around 1%, because of this it does not keep well for more than a few days. East End Brewing did a draft only version that they supplemented with a mash to give it a higher OG which gives it a longer shelf life and boosts the flavor. Since this is a pretty oddball batch I opted to make only 2 gallons. 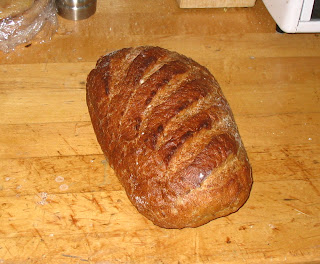 I bought a loaf of organic Jewish Rye from my local Whole Foods, I then left it out to stale for 1 week. 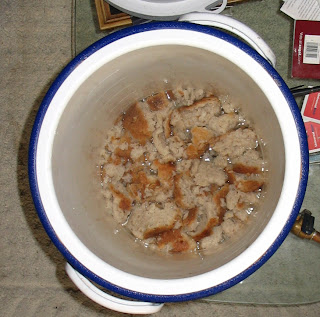 The morning of my brew I tore up the loaf and combined it with about a gallon of 170 degree water in my cooler mash tun. I put the cover on and left it alone until I got back from work. 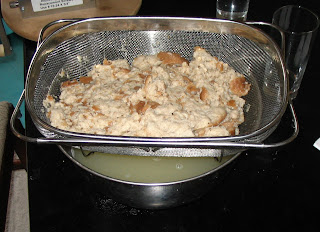 I poured the bread "goo" into a metal strainer to separate out the "juice." I got about 3 quarts of light-yellow starch liquid. 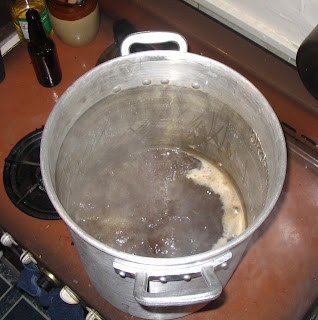 I did a small mash of pale malt, rye malt, and brown malt. I only did a 30 minute boil and added 2 quarts of the bread juice with 5 minutes left in the boil. 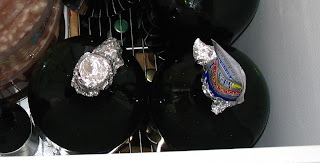 I chilled the wort and then pitched half with American Ale yeast and half with Red Star Highly Active dry yeast. The bread yeast started visible fermentation first, but gave off some unpleasant aromas (sulfur, meaty).


I sent an email to East End asking for some details on how they used the bread yeast, I heard back after I brewed, but I will certainly put the info to use in future batches. The head brewer Scott told me that they pitched only 2 tbls of dried Red Star yeast in 15 barrels (465 gallons)!!!! 7 gram yeast packets have 2 1/4 tsp of yeast, so that means my pitching rate was 25 times higher than his. This may explain the yeasty smell that is emanating from that half of the batch, but hopefully that is just a passing aroma.

Luckily after about a week the extremely yeasty aroma left. I took samples of both batches after 10 days, both were very nice. The 1056 batch was almost too clean (not much character), while the bread yeast half was very nice (bready with a mildly spicy Belgian character).

Steeped 1 loaf of stale organic Jewish rye bread from WF in 170 degree water (used cooler) for 12 hours. Boiled down wort to 1.75 gallons and added 1/2 gallon of bread water extract. Bread juice was about 1.012, tasted like wet rye bread. 1/4 tsp of yeast nutrient added. Cooled to about 90, then divided into 2 4 L jugs and put into the freezer at 65.

9/15/07 Tasting notes. Turned out to be a great session beer with the bread yeast and 1056 halves being very similar. The bread yeast gives it a slight Belgian character, but both a bready and easy drinking.