Kombucha BottlingMy method for bottling is pretty simple. I put a funnel on top of a cleaned and sanitized beer bottle, then I add in some white sugar (normally I do 3/4 of a tsp per 12 oz, but despite using a bigger bottle I kept the same 3/4 tsp for this batch to keep the carbonation closer to that of regular beer) then pour kombucha in. I figure it isn't worth being careful and siphoning lime I do with beer because I will drink this long before oxidation would become an issue. I then leave the bottles out at room temperature for a week or two, during this time the yeast will produce CO2 which will slowly dissolve into the liquid to equalize the pressure in the head space. I then put the kombucha into the refrigerator until I am ready to drink it.

Tasting of my 1st attempt at malt kombucha 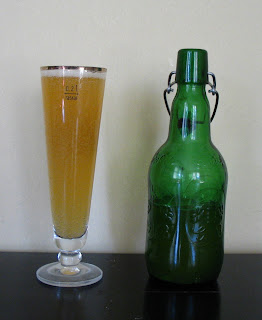 Appearance - The thin white head sits onto of a cloudy yellow liquid. It isn't chill haze, but bits of the kombucha culture itself.

Aroma - Plenty of sour vinegar (acetic acid) in the aroma, but it isn't enough to be sharp or offensive (to me anyway). Behind that is an earthy note along with some hay. It is similar to my plain kombucha (which I have failed to do a full tasting of).

Taste - Tip of the tongue wake you up acidity fades to a worty sweetness in the back of the mouth. As I continue to drink, the sourness fades a bit leaving a rather smooth flavor profile.

Mouthfeel - Mild carbonation with a medium-light body. Definitely a different effect than the spritzy carbonation and ultra thin body I normally end up with on my plain kombucha batches.

Drinkability/Notes - Not the tastiest beverage I have concocted, but it certain proves that this is a viable idea. Next time I think I will leave it for more than 10 days before bottling to try to get rid of the under attenuated flavor. According to my hydrometer reading the apparent attenuation was about 50% on this batch.
The Mad Fermentationist (Mike) at 10:45 PM