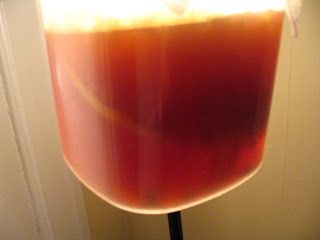 Flanders Red is just about the only beer style that any acetic acid (vinegar) is considered acceptable. La Folie from New Belgium and Rodenbach Grand Cru often have a sharp acetic contribution, not too much unlike a nice kombucha. Thus an idea formed in my head, why wait a total of 18 months for my "traditional" Flanders Red to age when I can make a low alcohol copy in 2 weeks with my kombucha culture.

So after I bottled my first attempt at making malt extract kombucha, which seems to have gone very well, I decided to give it a shot. I brought 2 qrts filtered water up to 150 degrees and added 1 oz CaraVienna, 1 oz CaraMunich, and .5 oz CaraAroma (these three caramel malts will give the "beer" its characteristic red color, dark fruit flavors, and residual sweetness) along with 5 oz of light DME. I let it steep for 30 minutes before running my skimmer though it to remove the spent grain. From there my process was the same as any other kombucha (boil, cool, pitch, ferment, prime, bottle).

Fermentation has been going much faster and cleaner now that I have temps in the 80s on the kitchen windowsill, it is these same high temperatures that are stopping me from doing another batch of sauerkraut which likes temps in the mid-60s.
The Mad Fermentationist (Mike) at 8:28 PM