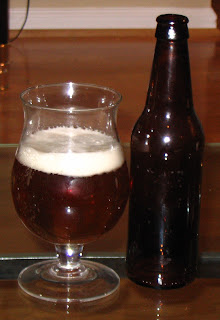 Appearance – Pours slightly hazy and golden into my Duvel tulip. The white head starts out around 2 fingers before dropping to about ¼ inch where it stays for a long time.

Smell – Huge funky nose with an almost candied fruit character. I get a hint of tartness as well, but it is distant. The Brett is in charge of this one, basically no malt or hop character is getting through. A well respected sour beer homebrewer though this one had a strong sour cherry aroma, but I just don't pick it up. There isn't any alcohol or hop presence, there isn't too much of either in the beer.

Taste – A bit of bread with layers of funk (actually not that different than my Brett bread...). The funk is more earthy in the mouth than the candied fruit that was in the nose. There is basically no detectable bitterness which makes the beer seem sweeter than its attenuation would suggest. The more I drink the smoother and less funky the beer seems, by the end of the glass it seems like it could be a sessionable.

Mouthfeel – The body feels medium-full with medium carbonation. The carbonation could be a bit stronger, but I'm glad I have a buffer in case the Brett drops the gravity another point or two.

Drinkability & Notes – Over the last few weeks this has really turned the corner from slightly funky to a Brett monster. It is a shame that I failed to do a formal review before this one changed, it actually tasted pretty much the same as my first 100% Brett beer for the first few weeks after it was carbonated. I'm also struck again by how different this version is from the cherry/wine half. It is coming along nicely, I look forward to seeing this one continues to evolve.