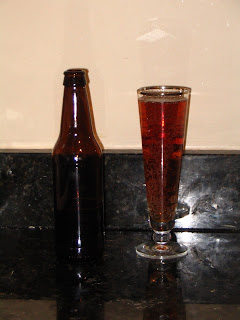 Appearance – Pours with a thin white head that quickly falls despite the rapid carbonation. From a steep angle the beer appears dark red, but from the side it is closer to orange/amber. Crystal clear (until the second pour delivers a bit of sediment) despite the fact that this beer was never cold conditioned.

Smell – Mild cherry with light Brett funk (no barnyard, just a bit of fresh hay and fruit). There is also a mildly floral scent. Very nice, and much subtler funkiness than the bottle of the straight version I had over the weekend at my homebrew club meeting (BURP).

Taste – Some bread, light funk and a hint of cherries. The flavor is very smooth with an almost buttery softness. The slight astringentness that was present a few weeks ago is now gone. The cherries are not as strong as I had intended, but I prefer too little fruit to too much. Good balance, dry with almost undetectable bitterness and tartness.

Mouthfeel – Solid effervescent carbonation on top of a medium body.

Drinkability & Notes – All I can say is wow, the cherries seem to have covered up the more aggressive funky Brett flavors leaving a very mellow easy drinking wild ale. I may have to put a generation of my Brett anomalus to a full batch of this beer with a 50% boost in cherries (or maybe a switch to fresh sour cherries) this summer. Not sure if the head retention issues are due to a less than clean glass or a bit of oil that was on the dried cherries that I thought I had washed off.