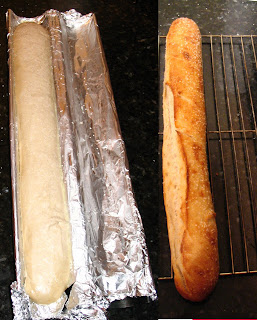 I had some Brett from Mo Betta Bretta saved in a growler in the fridge. Not having anything else to do with it I decided to see if this yeast could lend its unique flavor to bread. To make things more interesting I decided to also add a few tablespoons of kombucha, I was hopeful that the microbes would get along and make a unique sourdough.

I made a sponge with 6 oz (by weight, so much more accurate than using volume) of all purpose flour, 3/4 cup lukewarm water, about 1/8 cup thick Brett slurry and 1.5 tbsp of fermented kombucha. I let it sit out overnight to make sure the Brett acclimated to its new task. By the morning there was clearly activity, although not as much as I normally get from dry baker's yeast.

I then kneaded in 10 oz of flour, 6 tbls warm water and 1 tsp salt. I put the dough in a saran wrap covered bowl and placed it in the oven with a pan of hot water to rise. After one and a half hours (the normal rise for this recipe) the dough had risen some, but not the requisite doubling. After another hour the dough was close to where it was supposed to be. I shaped the dough into two baguettes and put them back in the oven to rise until dinner time.

After the bread had doubled again (about three hours) I preheated the oven to 500 degrees with my baking stone (large overturned terracotta flowerpot base). The bread baked for about 15 minutes, until it was golden brown and crunchy.

After cooling for 30 minutes the baguette was ready to eat. The smell was mildly funky and Brett like, but other than that looked and tasted just like a regular loaf of bread. The second loaf is spending the night in the refrigerator, I'll save some of the dough from it to see if the Brett will adapt to its new home and produce a suitable sourdough starter.

The next night I used the second half of the dough to make a pizza with some left over roasted pork tenderloin and caramelized onion. The Brett character had intensified and nicely complemented the earthy flavors of the meat, onions and cheese. The dough, even cold, was very easy to work with, I have no idea if I can credit this to the starch munching Brett, or if it was just that particular dough recipe. Sadly, I forgot to save any of the dough, so I guess I'll be making a new starter soon.
The Mad Fermentationist (Mike) at 9:29 PM