So odd to get one of my favorite and least favorite sours out of the same wort (recipe). The half with cherries was magical, the half without is bland and listless. In addition to no cherries, this half had BM45 red wine yeast and Wyeast Roeselare in place of 58W3 and dregs from a De Garde bottle. I had reasonable results with BM45 in this Red Wine Yeast Flemish Ale, so I don't think it is to blame.

It seemed like a good time to revisit this batch because the scaled-up version went into barrels on Saturday. For the 10 bbl batch we used 58W3 for primary fermentation in stainless steel. We procured three Pinot Noir barrels plus two bourbon barrels for aging. My hope is that the spirit barrels provide a nice vanilla character to mingle with the cherries. Each will get a dose of microbes, East Coast Yeast Flemish Ale, Wyeast Roeseleare, and maybe additional microbes from our collection. Two of the barrels got 25 lbs of dried sour cherries. Next summer, when fresh sour cherries are available, we'll select barrels and blend into a tote for additional fruiting. 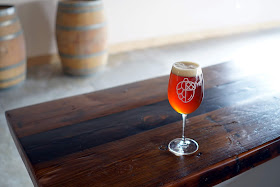 Smell – Spice, caramel, apple sauce. A weird mix that doesn’t really remind me of a Flemish red. That wouldn’t be a bad thing if the flavors were enticing or synergistic.

Taste – Interesting spice notes as in the nose. Cinnamon especially. The fruitiness reminds me of quince paste, sort of apple, but not quite. Tart, but not really sour. The malt is one-dimensional, toasty. Not impressed by Roeselare as the sole source of microbes.

Mouthfeel – Thin, a bit watery despite finishing at 1.016. Solid medium-carbonation.

Drinkability & Notes – A real meh beer. Not off in any specific way, there just isn’t anything to carry the beer.

Changes for Next Time – For the scaled-up version, we swapped the Briess base malts for equivalent Castle malts. Other than the variety of microbes and barrels, we'll be sticking pretty close to the script for the cherry version. 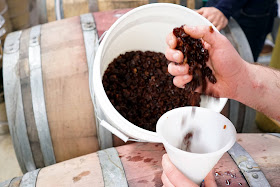