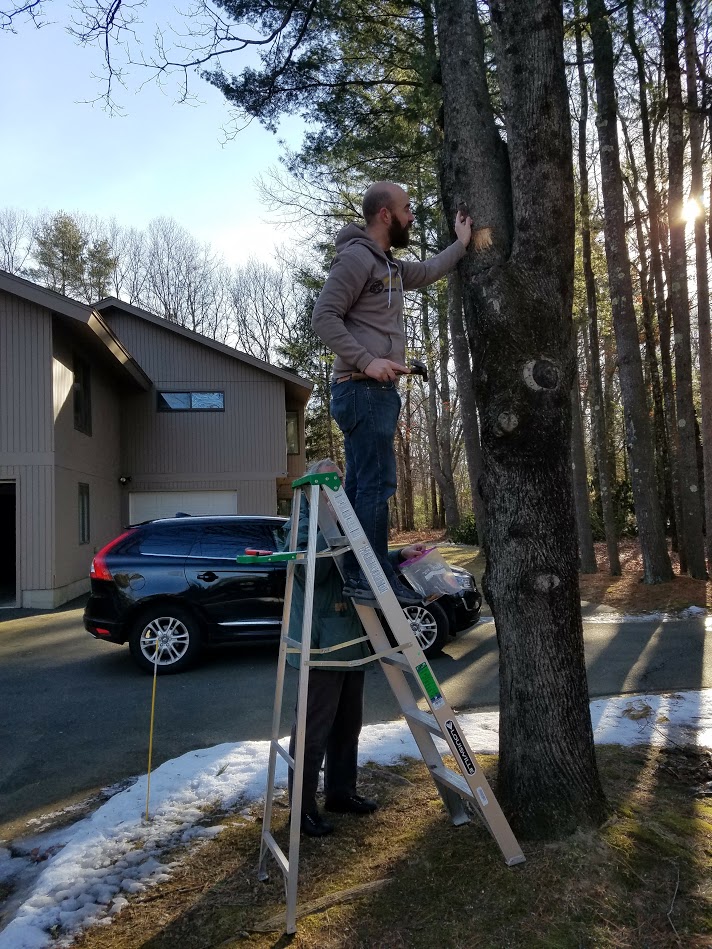 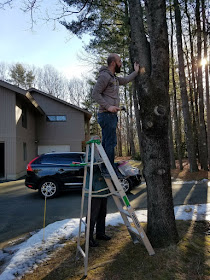 I'm suspicious of any "maple" beer that smells more like maple syrup than actual maple syrup does. The aromatics in real maple syrup just aren't that potent when diluted 10:1 and then fermented. Many breweries add some maple syrup (so they can put it on the label), but bolster it with extracts or maple-flavored coffee beans. Fenugreek is another, more natural, option used to flavor imitation syrups. Another approach is to add maple syrup to the chilled beer to preserve sweetness and flavor, but it doesn't make much simple sugar to overwhelm the usual beer balance.

Two years ago when I brewed my third Adambier (recipe) I added 1 quart of dark maple syrup to 5 gallons along with a cup of bourbon. The maple flavor was relatively subtle (tasting notes). After reading The Homebrewer's Almanac, I wanted to try their technique of harvesting maple bark, toasting it, and then adding it to the boil. I found the opportunity a year ago when I visited my parents. Ideally I would have used bark from a sugar maple, but the black maple in their yard was good enough for a first try.  I picked a spot that didn't have much moss growing on it and chipped off a small patch.

When I got home, I toasted the two ounces of maple maple bark in the oven until aromatic, 55 minutes at 350F. I then simmered the bark in two quarts of water for 60 minutes uncovered. After a few test blends, I opened the keg of Adambier and added one quart of the resulting liquid into about 3 gallons of beer. 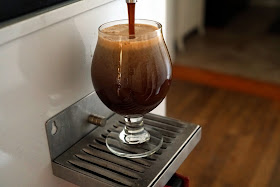 Smell – The nose has a deep blend of vanilla and caramel. The bourbon and maple work synergistically, but it doesn’t have the obvious maple flavor. Raisins or prunes are starting to come out as faint signs of oxidation. Smoke is mild, a subtle background flavor giving the beer a savory quality.

Appearance – The body is nearly opaque dark-brown, but there is clear amber right around the edges. Tight tan head. Despite the year sitting pressurized with beer gas, the head retention is good but not great. With the high alcohol (including fortification) that may be the best I can hope for.

Taste – The woodsy-vanilla flavor I got from the maple bark in present in the flavor. I could see some people confusing the slight butterscotch note with diacetyl, but I get that in the syrup as well. Smoke plays with it back and forth in the finish, more defined than the nose. Sweet thanks to subdued hop bitterness, but not sticky. Alcohol warming is mild, despite the ~11% ABV (diluted from 12% by the bark-water).

Mouthfeel – Rounded thanks to the low carbonation and creamy head.

Drinkability & Notes – It’s a unique beer. Layers of flavors that make it a strong beer that is for savoring. That’s what I want in a ~11% ABV beer, something that would be impossible to achieve at a moderate ABV.

Changes for Next Time – I’d like to try the same technique with sugar maple bark to see if that flavor is a little more reminiscent of maple syrup. That said, this worked out well as is! Maple bark isn't the only bark that works, when I visited Scratch Brewing they had a beer with toasted oak bark on that had a coffee-like note. They suggest hickory, cherry, and cedar bark too.

I also took the book's suggestion to make my own imitation maple syrup by boiling the remaining 3/4 cup of maple-bark extraction with 1.5 cups of table sugar until it reached 219F. The amber syrup has a strong vanilla-woodsy flavor, and it works nicely (especially in savory applications). Not quite real maple syrup, but more interesting than pancake (aka telephone pole) syrup!

I recently stumbled into Fallingfruit.org which is a user generated map of foragable plants. Taking the bark off a tree can be hazardous to the tree, so make sure you clear it with the person or better yet take it off a dead tree. 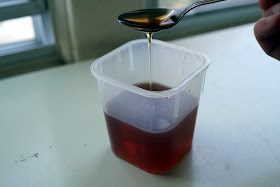 I get a commission if you buy something after clicking the links to MoreBeer/Amazon/Adventures in Homebrewing/Great Fermentations!
The Mad Fermentationist (Mike) at 7:30 PM 6 comments:
‹
›
Home
View web version