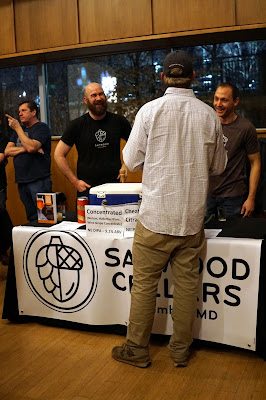 Scott and I are still pushing forward towards opening Sapwood Cellars; here's a post with our January progress. In February we've started refinishing the tasting room floors and procuring tables and chairs while we wait on equipment and licensing. That said, the biggest influence on our brewery's success may be the fate of the competing bills to change Maryland brewery laws. Paste has a good write-up. In addition to their legislative work in Annapolis, the Brewer's Association of Maryland also throws occasional beer festivals. We decided to make their Love Thy Beer: Winter Warmer Showcase our public launch. Luckily for us they pull a license that allows new unlicensed breweries to pour homebrewed test batches.

Scott brewed a split batch of NEIPA, Oat Pillows was dry hopped with Simcoe, Mosaic, and Nelson, while Concentrated (recipe post) was ramped up to DIPA territory with the addition of white wine grape concentrate and wine yeast then dry hopped with Nelson Sauvin and Hallertau Blanc. Both were delicious, and the wine contribution to Concentrated really worked nicely.

For Cheater Hops, my contribution, I wanted to push big flavors hoping to make it stand out in a small pour. I went on the small-end of DIPA (or the big-end of IPA) to enhance the body and mouthfeel. My pre-boil gravity was a little lower than expected, so I extended the boil. Taking a cue from this NEPA, I went heavy on hot-side Simcoe and Columbus. To increase the citrus aroma I fermented with Imperial Citrus, their version of Sacch Trois (I especially appreciate their larger pitching rate compared to White Labs on this one), a yeast I'd used in Modern Times Neverwhere and this Juicy Pale Ale. 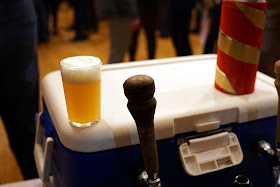 I dry hopped the half of the batch I brought to the festival with two of my favorite varieties: Citra and Galaxy! For the half to have on tap at home I tried Belma for the first time, which is usually described as strawberry, with Moasic as a counter-point. In both cases I added a first dose of hops late-fermentation and another in the keg. Rather than cooling the keg right away as I usually do, I primed each with sugar and 1 g of CBC-1, rehydrated. This strain was selected to only ferment simpler sugars and work incredibly quickly, scavenging oxygen, allowing a week of warm storage to increase hop aroma extraction. That said, 6 oz in each dry-hop mesh tube was really pushing their capacity, 4-5 oz is likely as much as I'll add in the future.

At kegging I added 1 mL of Kalsec Hexalone to each. In addition to being foam-positive, this isomerized hop extract also increases the perception of a "rounded" body. Eventually I'll have to do a side-by-side-by-side with Tetralone (used in this Stonefruit Vanilla Nitro Sour), and without any extract to get a better sense of the contribution. Kalsec markets Hexa is as Head Master, but the price and large size make it less practical for homebrewers.

One topic that has seemingly garnered more discussion among commercial brewers than homebrewers is "hop creep." Certain hop varieties (e.g., Mosaic) contribute enzymes that free fermentable sugars. This can cause problems. If most of the yeast has already been crashed out, the few remaining cells can resume an unhealthy fermentation, often leaving diacetyl. When I was in California several brewers dialing in their NEIPAs mentioned 58F as the "magic" temperature for dry hopping; warm enough for good extraction but cool enough to inhibit the yeast. I wonder if some of these unfermented simpler-sugars contribute to the perceived sweet "juiciness" of the finished beer? In this case the gravity dropped of the half with Mosaic/Belma dropped to 1.018 in the keg while the Citra/Galaxy keg was stable at 1.020. The result was a couple foamy pours until I vented the head-space sacrificing a portion of the aroma on the Mosaic/Belma.

For the Citra-Galaxy half I wanted to bring a "clean" keg to the festival to avoid stirring up the yeast and hop-particulate, so right before heading out I filled a clean keg to the brim with StarSan and pushed it out with CO2. This removes (nearly) 100% of the oxygen, better than pressurizing and venting multiple times, while using less gas. I then jumped the beer over using the process I outlined in this post.

The festival itself was a big success! Our rebuilt jokey-box poured well, we didn't run out of beer, and we met a lot of locals who were really excited for us to open. The beers were all well received from the comments we got, and I'll take a 4.34 on Untappd for this batch.

This video follows the process from making the yeast starter until we poured it at the beer fest!

Smell – Really big and bright: mango, tangerine, and pineapple. Smells Has a few green-notes, but not overtly grassy. The yeast supports those tropical and citrus notes from the hops without being obvious or phenolic. Minimal malt. Doesn’t have the “rawness” of hop aroma that some of my NEIPAs without keg conditioning have.

Appearance – Good head, but not spectacular. I’m not sure how valuable the isomerized extracts are in beers that are already so loaded with hops. They seem more valuable in sour beers which lack substantial hopping. Good level of haze, in fact hazier than most of my recent batches. Nice light yellow color with just a hint of gold.

Taste – Similar hop/yeast character to the nose, bright tropical fruit. Really saturated through the palate. Slight malt sweetness supports those flavors. Firm bitterness, in the finish, but not hop-burn on the throat.

Mouthfeel – Pleasantly full and fluffy. Carbonation is a little low on this one because I forgot to repressurize the keg after pouring it at the beer fest.

Drinkability & Notes – One of the best DIPAs I’ve brewed. The hops work together perfectly, I don’t “miss” the Citra and Galaxy on the hot-side. No dramatic color change when I left a small amount out overnight, thanks to no oats?

Changes for Next Time – Not much to change, really terrific hoppy beer that is worth the extra couple points of alcohol.

Smell – More subdued than the other half, perhaps thanks to venting the head space of the keg a few times. The aroma is more berry than tropical, but still has indistinct citrus notes. Doesn’t seem any greener despite still sitting on the keg hops, while the other is in a clean keg.

Appearance – Identical. I’d heard that Galaxy is especially haze-positive, but in this case both are plenty hazy without being murky.

Taste – Comes across as slightly more bitter. Maybe more hop-material in suspension thanks to the keg hops? The hop flavor is more strawberry here too, although the Mosaic prevents it from being too far from the usual. It’s a good flavor, but not as compelling.

Drinkability & Notes – Good, but not one of my favorite batches. Still has a nice hop flavor, but the aroma doesn’t call me back for another sip like the best DIPAs.

Changes for Next Time – The Belma shows promise, but might be better at 25% of a hop blend rather than 50%. A way to add unique flavors without having to carry the aromatic load.

2/3/18 Moved both the the kegerator and attacatt to gas.

2/15/18 Jumped the Citra/Galaxy half to a keg that I had filled with StarSan and then pushed out with CO2. Served at Love Thy Beer: Winter Warmer Showcase.

I get a commission if you buy something after clicking the links to MoreBeer/Amazon/Adventures in Homebrewing/Great Fermentations!
The Mad Fermentationist (Mike) at 5:38 PM 26 comments:
‹
›
Home
View web version