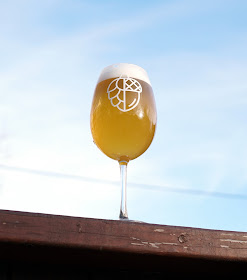 When we open sometime this summer, Sapwood Cellars' clean beer program will be focused on
hops... but don't mistake that to mean we'll have eight IPAs on tap at all times! One recipe-concept I'm working on is a hoppy beer for people who don't like IPAs. The idea of low bitterness, a little extra yeast character, and integrated citrusy aromatics from the hops. A gateway hoppy beer for the sort of craft beer drinker that usually orders a wit or shandy.

We'd like to keep our yeast situation simple to start. I'm a big fan of Allagash Hoppy Table Beer, which is fermented with their house wit strain. While that is appealing (and I've brewed a few delicious hoppy wits before) we likely wouldn't get enough use of a liquid yeast to justify it. There isn't a dried wit strain available, but I was inspired by a post about a supposed blend of dry yeasts used by Tree House (big shout-out to HBT's Isomerization): S-04, T-58, and WB-06. I kept the fermentation temperature at 60F ambient to restrain the yeast expression; I just want subtle fruitiness mingling with the hops... no banana-boat. Although I have had good luck with hoppy hefeweizens as well...

For the rest of the recipe I revisited an old favorite, Simpsons Golden Naked Oats, in hopes of providing a creamy mouthfeel in this moderate-gravity beer. For hopping, I opted for partial-chilling to 185F before the whirlpool addition to reduce alpha acid isomerization imparting more hop aromatics with less bitterness. I used Citra and Amarillo through-out, a callback to one of my all-time favorite recipes that I helped develop: Modern Times Fortunate Islands! 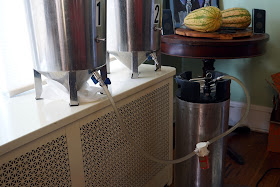 The big question I wanted to answer with the a split-batch was: how valuable is a brew-day dry hop compared to a now-standard late-fermentation addition? I added 2 oz of Citra and 1 oz of Amarillo to one fermentor immediately following the yeast, while the other had to wait for the same dose until day four of fermentation. The resulting difference is relatively subtle, however everyone I served the beers to blind has identified the late-dry hop as more hoppy/aromatic... but that isn't necessarily what I'm looking for in this beer! In terms of measurements, the timing of the dry hop did not appear to have an effect on the FG or pH.

After my first attempt at filling a keg through the dip-tube resulted in a clogged poppet several people suggested adding a Bouncer Filter in-line between my SS Brew Bucket and the liquid-out post. I bought one, and it worked like a charm catching the hop particulate large enough to cause problems. No complaints!

Here's a video of this batch from brewing to drinking!

Appearance – Hazy yellow. Not cloudy or murky, but not as hazy as many NEIPAs. The Golden Naked Oats didn’t add much color compared to my standard recipe. Head retention is OK, lacing is better.

Taste – Strikes a good balance between yeast and hops, with fruity flavors mingling from both to create something vaguely tropical. No big phenolic spiciness from the T-58 or WB-06, but I can taste a touch of clove as it warms. Not as bitter as the 40+ calculated IBUs would suggest thanks to the lowered whirlpool temperature.

Mouthfeel – Surprisingly thin considering the chloride, oats, and moderate attenuation. Carbonation is medium, where I like it for hoppy beers.

Drinkability & Notes – Really pleasant blend of styles and flavors. These are my favorite arguments against holding too closely to styles, even relatively new and broad ones.

Changes for Next Time – Still need to find a solution to the body being thin, but otherwise it is pretty close to what I envision for this beer. A good technique for adding more hot-side-type aromatics without additional iso-alpha.

Smell – Hops jump out more, vibrant and a little green. The two beers have converged a bit as they’ve sat on tap, but are still distinct to me. The Amarillo helps to temper the Citra, but

Appearance – Similar, although just a hair hazier. White head is the same.

Taste – The yeast is more obscured thanks to the outsized role the hops play, no clove. The Citra and Amarillo really shine: melon, orange, and tropical. The malt is also relegated to the background, preventing the beer from tasting like “hop water” but without a really distinct contribution.

Drinkability & Notes – This one kicked first, but I also shared a few more growlers of it. I enjoyed it a bit more, even though it wasn’t exactly what I was going for!

Changes for Next Time – This is the better timing for a classic hoppy beer. It provides a more vibrant aroma, and there was no issue with oxidation despite being at the tale of fermentation.

Left at 60F ambient to ferment.

12/21/17 Dry hopped the second half with the same amounts. Fermentation appeared nearly finished. Warmed both to 65F. 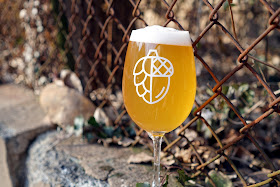 A torch passing of sorts. With the bottles of my 2007 batch of Courage Russian Imperial Stout clone running out I rebrewed the recipe (with a few tweaks) in 2015. I’ve labeled the caps from 2017 to 2050, so this marks the extension of my now decade-long Christmas tradition!

Watch me drink the two beers, or read my thoughts below. If you've got any comments on the videos (other than my microphone induced v-neck) let me know!

Smell – Fantastic mixture of deep/dark Port-like fruitiness and rich caramel. Roast is subdued, more coffee than a Quad or Belgian Strong Dark, but not by much. Brett provides subtle leathery notes, but it isn’t obvious with everything else going on. I could pass it off as "age" if I hadn't brewed it.

Appearance – The head is soap-sudsy, the bubbles are larger than expected. Nearly pitch-black body. When I returned for a second pour it came with hard bits of desiccated yeast. Should have poured it all to start!

Taste – Similar to the nose, rich and full of plums, figs, caramel, and light roast. The Brett lingers softly in the finish. Leather, and maybe a little cherry. Harmonious, really balanced thanks to the added attenuation by the Brett. Minimal hop bitterness thanks to the aging. Still tastes remarkably fresh compared to big stouts I’ve brewed more recently, thanks to the metabisulfite.

Mouthfeel – Smooth and full, without being sticky. Low carbonation, perfect for a big dark beer.

Drinkability & Notes – Would have opened another bottle if it was an option. One of my favorite batches of homebrew to date.

Changes for Next Time – As close to perfection as I can imagine creating in a big-dark-funky-fruity-historic stout! I don’t know what Courage Russian Imperial Stout tasted like 100 years ago, but I’d be disappointed if it wasn’t this good!

Appearance – Darker, denser, creamier, longer-lasting head. Part of that is higher carbonation, and the rest is likely freshness.

Taste – Coarser, with burnt toast, Brett-funk, and oak competing for attention. There are some nice flavors there, and the fresher-brighter-cleaner biscuity and roasty notes are pleasant. Hopefully with time the oak will mellow and the Brett and malt will balance.

Mouthfeel – The carbonation disrupts the smoothness, especially when combined with rough tannins from the oak. Hopefully the latter will mellow, and swirling helps with the former. Not sure if I was unsuccessful at killing the Brett, or if I simply over-primed (or had attenuation from the bottling strain).

Drinkability & Notes – It’s OK, but still young, rough, and discordant. It has a lot of time to improve, and I'll be disappointed if it doesn't!

Changes for Next Time – Hopefully time is all that is needed, but would be hard not to revert to the original recipe if I were to brew this again… especially on a larger scale! 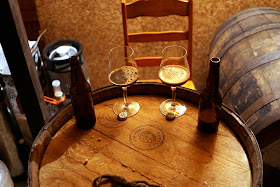 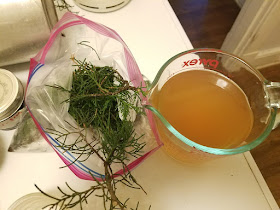 I really enjoy beers brewed with local ingredients, but local grains and hops have never been at the top of that list. In both cases local usually doesn't mean fresher, higher quality, or more variety. Often the opposite is true, and for double the price. Conversely, locally grown fruits, vegetables, and herbs are naturally advantaged over their nonlocal competition. They are at their best immediately after harvest and include varieties not suitable for shipping. Buying fresh in these cases is often less than the shelf-stable versions (although that means more processing for the brewer).

For this batch of rye saison I opted for a blend of hops and grains from around the world, paired with freshly harvested juniper (Eastern Red Cedar) from my backyard. This was my second batch using trimmings from that tree, after the more traditional Summer Kveik earlier in the year. The other half of this batch went on to be a rye pale ale, dry-hopped with Galaxy and I didn't want juniper in that beer. To avoid splitting the boil I added the juniper as a tea, rather than directly to the mash or wort.

I wanted a more complex and substantial malt backbone to counter the aromatic hops and juniper, so pale malt and rye made sense. Big quality-of-life upgrade from my old Barley Crusher to my new Monster Mill 2Pro-SL. Not far from this saison brewed a few years ago, but with spelt flour replacing the wheat malt. Fermentation was carried out by my house saison culture. 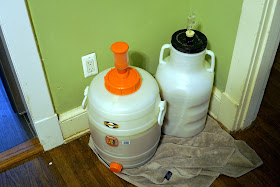 It was also my first batch using the Genesis Fementer that Brewcraft USA sent for me to try out. It features a pre-santized bag to ferment the wort in. It made clean up easy, but I found the bag annoying to work with otherwise. It took some effort to get it fluffed up enough to get the tubing down into it for run-off. I also found it difficult to see where my auto-siphon was for racking. In the past all of my fermentors had either been clear (glass and plastic carboys) or had a wide opening to allow me to see down into the fermentor to know when to tilt or stop to avoid sucking up trub.

This batch also has my second video, a bit abbreviated compared to the first and with slightly better audio thanks to a new microphone! 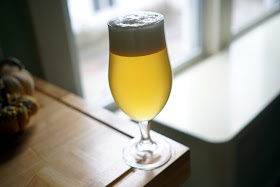 Smell – Nice mixture of generic American-hop-fruitiness and saison yeast pepper. Mild Brett-pineapple, but still fresh. Juniper comes across more naturally piney, no big apricot as I’ve tasted in a few beers brewed with boil-addition Eastern Red Cedar. Maybe has to do with an interaction with the malt? Seasonal flavor-change?

Taste – The hops and juniper meld beautifully, reinforcing each other. Slight maltiness in the finish, thanks to the rye malt. Juniper comes out most in the finish, especially towards the bottom of the glass. Woody, green, not like toasted oak (no vanilla or toasted nuts).

Mouthfeel – The extra proteins and beta glucans from the rye and spelt combine to provide some substance to the body. Carbonation is a little low, would have been fun bottled. At first it had sort of a resiny harshness to the finish, thankfully that has dropped out.

Drinkability & Notes – Weird, but not too weird. Surprisingly drinkable with a good balance of hops, herbs, and funk.

Changes for Next Time – Would like to try it with juniper in the mash/boil to see how it changes the expression. 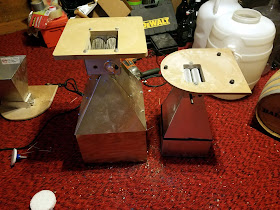 For the juniper infusion, brought a gallon of water to a boil with 40 g of Eastern Red Cedar. Boiled for 60 minutes with 40 additional grams at 30, 10, and flame-out. Allowed to chill naturally with the juniper still in there. Added 2 cups to the saison half (~25% of the resulting amber liquid).

Saison with my house culture, directly from fridge (honey saison).

Left both at 68F to ferment.

12/7/17 Kegged the Saison and started force carbonation in kegerator.

I get a commission if you buy something after clicking the links to MoreBeer/Amazon/Adventures in Homebrewing/Great Fermentations!
The Mad Fermentationist (Mike) at 8:18 PM 14 comments:
‹
›
Home
View web version