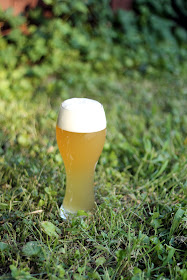 There are a surprising number of beer nerds who avoid “wheat beers.” In general it isn’t the wheat itself that is objectionable (plenty of these same people have no issues eating bread or pasta), but rather the banana and clove notes produced by the hefeweizen strains often associated with wheat beer. I have to admit, even though they are best fresh, I shy away from an average brew pub hefeweizen. Ferment too warm, and the subtle ripe banana aroma turns into banana runts or Now-and-Later: artificial, overpowering, and moving towards bubblegum.

My solution, borrowed from Eric Warner (now brewing  Karbach in Houston Texas) via his Classic Styles: German Wheat Beer, is to ferment cooler than most ale yeasts (he suggests pitching at 60°F and fermenting at 59°F). Jamil Zainasheff advocated this approach as well (62°F fermentation) in Brewing Classic Styles. I usually start fermentation around 58°F ambient, allowing the temperature to rise into the low 60s°F as the yeast slow. Despite the lore that a cold fermentation promotes clove-phenols, I've never seen research to support this. Rather, cooler fermentation reduces ester production allowing the clove to be more apparent. The amount of 4-vinylguaiacol (clove) is the result of the ferulic acid from the malt, and the yeast strain selected. The problem with this batch was that I underestimated the amount of ice needed for my recirculating immersion pump and only was able to bring the wort down to 75°F; I gave the beer six hours at 58°F in the fermentation fridge before pitching to compensate.

While I love a well-made traditional hefeweizen, I’m also a fan of introducing citrusy and tropical hop aromatics! My first attempt was based on New Glarus Crack’d Wheat, with Cascade and Amarillo, and my second was hopped with nearly-impossible-to-source Riwaka. For this batch I opted for the Modern Times Fortunate Islands combo of Citra and Amarillo. The Amarillo helps to temper the aggressiveness that can be a single-hopped Citra beer. The malt bill is reminiscent of Fortunate Islands as well, with Simpsons Golden Naked Oats in place of the CaraVienna. I couldn’t help but get a glass of the original on Monday at the Modern Times event at ChurchKey (and I'll likely have another Tuesday 9/30 at Meridian Pint). 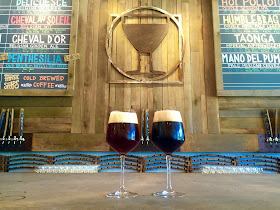 I’m a fan of Commonwealth Brewing Co. Taonga (their New Zealand-hopped imperial hefeweizen) as well. Convenient, as I’ll be down there Labor Day weekend for the release of our collaborative oud bruins (brew day notes)! We re-fermented half the batch on cherries and dates (Penthesilia), and the rest on blackberries and figs (Hippolyta). Richer fruits to stand up to the darker malts. There is a Sour Beer Dinner on Friday 9/2 in their barrel room, and I'll also be at their first anniversary party the following day when bottles will be available!  Can't wait to try the finished beers!


Smell – The banana and tropical hop punch have both settled down after some early clashes. The banana is still a little more assertive than in my ideal balance though. I wanted 1a-1b in favor of the Amarillo/Citra, this has it reversed. The hop combo works nicely, providing the fruitiness that a hefeweizen needs without any dankness or pine. 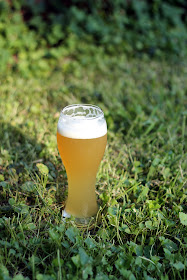 Taste – Banana leads with the orange and melon of the hops surging in and then disappearing, leaving a lightly citrusy hefeweizen in the finish with hints of clove. Bitterness is moderate, more than a traditional hefeweizen, but not approaching current American pale ale. Even a hint of vanilla as it warms.

Mouthfeel – The head adds a luscious creamy texture with each sip (reminds me of the substantive foam on cocktails shaken with egg whites). Once that dies down the beer itself is light, but the oats and chloride prevent it from tasting as light as it is.

Drinkability & Notes – If the banana was dialed back 20% it would be a real crusher. As is it is nice, but the hops aren't as showy as I want, and the banana is tiresome by the end of the glass.

Changes for Next Time – Back to my usual method of buying a few bags of ice at the store rather than trying to rely on ice packs...

Notes
-------
Split batch: hoppy hefeweizen with WY3068 and Citra/Amarillo, plus a Nelson/Mosaic NE-ish APA with Sacch Trois 644! The grains and hops listed are for this batch alone.

7/3/16 Minimal sparge with 50% dilution with distilled water 6 g each CaCl and gypsum, plus 2 tsp of phosphoric acid.

Chilled to 75°F with ice-water recirculation. Chilled to 75°F, left at 58°F to cool for 6 hours before pitching mostly decanted starter. Up to 60°F after 48 hours.

7/14/16 Kegged (with bagged/weighted hops) and put on gas in the kegerator.

I get a commission if you click the links to MoreBeer/Amazon and buy something!
The Mad Fermentationist (Mike) at 7:28 PM