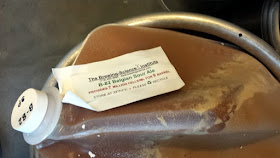 It’s the best week of the whole year, and this year it is happening less than an hour from my house!

Wednesday I’ll be making the rounds with James Spencer and co. recording content for Basic Brewing. I first appeared on his podcast way back in September 2006… damn! We’ll start our morning at Gordon Biersch Rockville (where I’ll get my first samples of the four red wine barrels of collaborative sour red that head brewer Christian Layke and I brewed a few months ago). Then onto BlueJacket/The Arsenal (the gorgeous brewery/restaurant from the group behind ChurchKey and a dozen other great DC beer spots) for a tour from head brewer Josh Chapman. Then onto Right Proper’s production facility in Brookland so James and Nathan can finally meet! Finally, back to my house to recover… and drink a couple bottles of homebrew from the cellar!

Thursday night at HomebrewCon Baltimore, my club (DC Homebrewers) will be pouring beer alongside craft breweries from the region at the Craft Beer Kickoff. I’ll be serving a keg of Simcoe/Mosaic/Citra New England IPA fermented with a blend of GigaYeast Vermont IPA GY054 and Wyeast London III WY1318. The second keg is already on tap and tasting like hoppy guava juice (final pH of 4.46)! My friend Scott Janish is pouring one of his NEIPAs too, stiff competition to be sure (he took first of 35 with another batch in the first round of National Homebrew Competition this year). 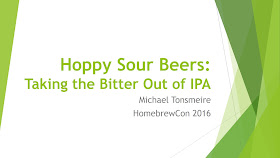 Friday I’ll just be hanging around, grabbing lunch with BYO folks, hitting the Milk the Funk meetup, going to seminars, and of course club night (with Audrey)!

Saturday I’ll be signing copies of American Sour Beers (or whatever people bring) from 12:30-1:30 PM in the Homebrew Expo (next to Mary Izett and Steve Piatz!). Then I’ll be presenting on Hoppy Sour Beers from 2:00-3:00 PM in room 314-317. I asked to only speak once because I couldn’t brew enough sour beer to satisfy two crowds, so they put me in a room that seats 900… I’d suggest getting there early and sitting towards the front! The talk covers the science and techniques to overcome (and capitalize on) the three inherent contradictions of brewing a beer that is both hoppy and sour:

2a. Hops have anti-bacterial properties…
2b. Some beer-souring microbes are sensitive

3a. Hops provide bitterness…
3b. Assertive bitterness and acidity clash

I’m sure that five gallons of each of the three example beers will go quickly, so here are preview process and tasting notes for those who can’t make it (or who sit in the back). The first two were from a split batch brewed a month ago, the third has a bit more age on it!

Tasting Notes: Big/fresh hop nose (truer than the NEIPA, but still more fruit than green). Bright, lively Brett character, tropical, but not juice. Finish brings in some funk, impressive for such a young beer. Acidity is tangy at best, more saison than sour. 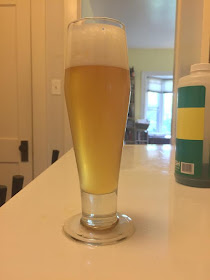 180F pasteurization with 1 oz each Simcoe, Mosaic, and Citra

Blend of sours aged in a red wine barrel with East Coast Yeast BugFarm #3 topped up with Malt Extract Lambic.

Dry hopped cold with 1 oz each Simcoe, Mosaic, and Citra during force carbonation

Tasting Notes: Big sour-orange rind nose, sharp lactic acid (with a hint of acetic), finish is a bit juicy (softer than the nose suggests). Hops are the mildest, despite the highest dry-hopping rate!
The Mad Fermentationist (Mike) at 6:30 PM