Split batches are wonderful! They provide the opportunity to see (and taste) the changes that just one variable can make. They helps to cut through all the confounding batch-to-batch variables and identify what a single tweak is responsible for. However, with sour beers you always have to be cautious not to read too far into them as identical worts aged in identical barrels under seemingly identical conditions can diverge as the microbes compete. The beating of a bacteria’s flagellum can cause a proverbial hurricane of flavor!

These two beers started from the same mash, I pitched the same microbes (White Labs WLP665 Flemish Ale Blend, and dregs), and aged them in two third-use barrels from Balcones Distilling for four months. While most of each batch then went onto fruit (raspberries for the rum, cherries for the malt whisky) I reserved a gallon of each fruitless to taste the base beer. While I love fruited sour beers, I’m usually far more interested in the straight-up examples. They provide a truer expression of the magic of microbes, barrels, and wort!

Smell – Madeira-like, brandy-soaked raisin aromatics with a touch of oxidation. A brighter fruit candy note as well – SweeTarts perhaps. A tinge herbal as well, not what I usually pick-up in an old/dark sour.

Taste – Flavor leaves those darker fruit flavors behind for cherry-acidity flowing into cocoa powder. Dry, but still enough to support the malt and oak. Not distinctly rummy to my palate… but in comparison to the whisky-barrel it is surprising how much of that fruit is from the barrel!

Mouthfeel – No tannins or anything rough. The acidity helps to cover-up the lean body.

Drinkability & Notes – Somewhere in the nebulous realm between old ale and oud bruin, with the barrel playing a wonderful supporting role. While I enjoyed the jammy raspberry contribution, I'm glad I also got to taste all the nuance here that was obscured by the fruit. Appearance – A twin, other than the slightly stickier head.

Smell – A cleaner more fresh-brown-liquor aroma. What I thought at first sip was dark fruit from the combination of fermentation/age/malt really seems to have been coming from the rum barrel. This one is more dusty-basement damp-oak. Coconut candy bar.

Taste – Acidity is tamer, but still firmly sour. The fruit is more plum than cherry, not as bright. The finish is a bit curdled milk, lingering in a not-entirely pleasant way. Likely more a result of the particular fermentation in this barrel rather than anything inherent to the wood/spirit themselves.

Drinkability & Notes – It is a fine beer, but next to the Rumble-barrel it is missing that extra something that makes a great dark sour. Academically it is the same, but I’m tossing the last few sips and going back to the other bottle for the last few ounces!

Sometimes the timing of a tasting gets away from me. I posted about the raspberry-rum half on this “Double Barrel” sour brown back in 2013; now finally getting around to the half that was aged in a Balcones Single Malt Whisky barrel and then on homegrown sour cherries from Audrey’s parents! 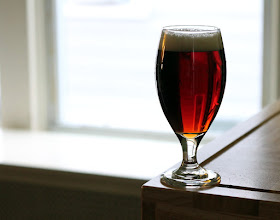 Smell – Hints of cherry-cola. Some mild age-perfume, but otherwise unharmed by the ravages of time. Subdued Brett-funk, more towards the Cascade Brewing model (as was the bourbon barrel that the culture came from).

Taste – Cherry has aged nicely: skins, pits, dried fruit, really concentrated. The malic acid from all those cherries certainly adds acidic sharpness on the front of the tongue compared to straight lactic. Just a hint of acetic, despite the four months in a five-gallon barrel (with its high surface-to-volume ratio). Graham cracker maltiness is subdued, but present. Slight buttery oak-coconut in the finish. Dry, but with a suggestion of malty-sweetness left to carry the big/dark flavors.

Mouthfeel – Medium-thin body, medium-low carbonation. About what I hope for in a dark sour, nothing to detract from the richness.

Drinkability & Notes – One of the best cherry beer I’ve brewed! I often find this most-singular fruit dominates pale beers, so I tend to prefer it against a maltier red or brown backdrop. The barrel adds nice complementary flavors without being too out-in-front. I’ll have to get around to tasting the fruit-less versions of these two soon…
The Mad Fermentationist (Mike) at 7:00 PM 3 comments:
‹
›
Home
View web version