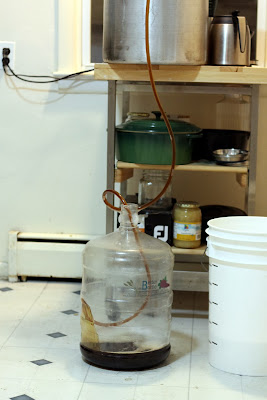 Dark-strong-sour beers have some serious magic in them. They age gracefully practically forever, developing deep complexities. De Dolle Oerbier Special Reserva is one of my favorites: tart, vinous, blue-cheesy, warming (but not hot, despite 13% ABV), and lightly oaky. Russian River Conseration, BFM Abbaye De Saint Bon-Chien, The Lost Abbey Cuvee de Tomme, and Boulevard Love Child are a few others worth seeking.

For the first Modern Times brew-with-Mike Kickstarter reward, I decided to brew something along the same line. I don’t know the recipe for the base Oerbier, but I’d assume a selection of specialty malts and some candi syrup are involved. In a beer like this, the specifics of the fermentables aren't terribly important as the bugs and wood will change their character. I also aimed for substantially less alcohol (8-8.5% ABV) to make it something I can drink with a bit more regularity.

For almost their first 20 years, De Dolle pitched a culture they picked up at Rodenbach. When the source dried up, they continued to repitched the culture, which eventually resulted in bottles exploding as the yeast became more attenuative and alcohol tolerant. The remaining bottles were transferred to used red-wine barrels to create the first batch of Stille Nacht Special Reserva. The result was so good they've released several versions of Stille Nacht like this (although I enjoy Oerbier Special Reserva more). A house Brettanomyces strain for these beers was re-cultured from an old keg returned from Finland.

Luckily the De Dolle's brewer’s yeast strain is purportedly available from Wyeast (3942, Belgian Wheat), unluckily the night before brewing I managed to knock my precariously balanced 5L flask off my under-sized stir-plate. A good reason to always keep a selection of dried yeasts on hand! 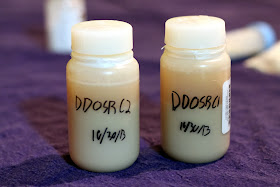 Rather than risk pitching bottle dregs from such a strong beer, Nick from The Yeast Bay offered to culture and isolate the dregs from a bottle of the 2012 vintage that I shipped to him. The two yeasts he isolated turned out to be not particularly attenuative, which may not be the worst thing for a strong beer like this. I pitched both strains because multiple Brett isolates generally preform better than one. I saved some of each culture for single Brett trials when I get to it though.

I added a few Port-soaked oak cubes I’ve had sitting in a mason jar for a couple years when I racked to secondary. I always have oak cubes sitting in a variety of liquors, ready to add when I need them. Another nice thing to have on hand.

Hopefully this batch turns out well, we've got 30 bbls of a similar recipe (with different microbes) aging in red wine barrels at the Modern Times Beer Fermentorium!

12/7/13 Racked to secondary with 1 oz of Port-soaked French oak cubes.

Added dregs from Modern Time Empty Hats as there wasn't much funk. 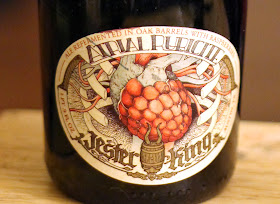 I have a complicated relationship with fruited sour beers. When I’m buying I shy away from them because the fruit tends to conceal the interesting flavors from the fermentation and barrel. Some of them are so delicious though, that I can’t help myself. When I drank Jester King’s Atrial Rubicite earlier this year it was one of those “wow” beers for me, saturated with concentrated raspberries (from hundreds of pounds of fruit in each barrel), without being sticky sweet like New Glarus Raspberry Tart.

For my take on the concept, I soured a brown base for four months in a third-use five-gallon rum barrel. When it had extracted sufficient character from the toasted oak, I racked four gallons onto 14 lbs of frozen/defrosted raspberries (purchased for $50 at Trader Joe’s on the way home from proposing to Audrey… I’m romantic). Considering a gallon of beer weighs a little over 8 lbs, adding 3.5 lbs of raspberries to it is pretty significant.

Recently someone asked me where I get the ideas for my recipes. In this case, in addition to the Jester King beer, I’d read that a compound (ethyl formate) found in both rum and raspberries is what the center of the milky way smells like, talk about brewing a clone! 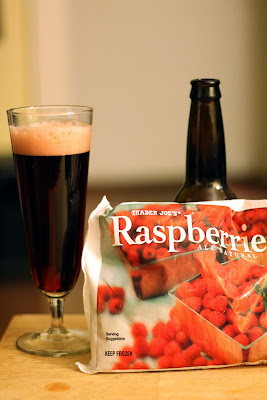 Appearance – Light pink/tan foam floating on a ruby-brown body. Mild haze when held to the light, but pretty clear. Not actually that much redder than some of my Flemish reds. The head dissipates fairly quickly.

Smell – No getting around that this beer is all about the fruit. The aroma is saturated with jammy raspberries. It is good, but a bit seedier than I intended, thanks to five months spent on the fruit (I would have preferred only three, but I was in San Diego at the time... the sacrifices I made!). As it warms the vanilla from the barrel peeks out, but otherwise there isn’t much else going on.

Taste – Tart, but not forcefully sour. The fruit carries through nicely, unlike many raspberry beers that impress in the nose and fall flat on the tongue. There is a hint of toastiness, I suspect from the oak. Fresh and lively. Not much Brett presence yet, shares many similarities with the rounded lactic acidity from our bourbon barrel (no coincidence considering it got dregs from the Sour Brown from it).

Mouthfeel – Medium-full for a sour beer (not chewy, but enough body to support the fruit and malt). The medium-low carbonation is all I need in a dark/sour beer.

Drinkability & Notes – Despite the intense fruit flavor, it is easy to drink. The added lactic acid from fermentation really helps the fruit to pop. It would be a perfect beer to pair with a rich dessert, loads of flavor and enough acidity to cut through without providing a double-dose of sweetness. Mine is not quite as vibrantly colored as Atrial Rubicite, but nearly the level of raspberry aroma and flavor. It’ll be interesting to see how the gallon I reserved without fruit tastes.
The Mad Fermentationist (Mike) at 7:34 PM 8 comments:

Brett/Rye Farmhouse Ale (Not a Repost) 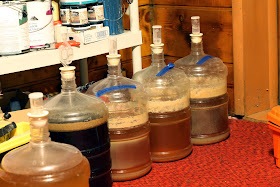 Going back to one of my favorite combinations: saison with rye malt in the mash and Brett in the fermentor! My friend Nate and I were both furloughed from our federal government jobs for a few weeks in October, during that time we decided to enjoy a sunny afternoon drinking beer, eating fried fish, and brewing. A couple years ago, we brewed a similar batch, that we wanted to refine. Young it was enjoyable, but it became obnoxiously horsey/rough/funky as it aged. That character could have been the result of several things, but I suspect it was simply the strains we pitched.

We split this batch three ways to try three different Brett blends, each with the same combination of saison ale yeasts. The Brett we pitched came from bottle dregs (from the abovementioned drinking), and a couple isolates that Bootleg-Biology Jeff dropped off a few weeks prior.

As with hops, sugar, and other ingredients, split batches are a great way to learn about microbes. This is especially handy with mixed-fermentation beers as the feedback loop is so long. If a batch takes a year or longer to be “ready,” the tweak and re-brew method could take a decade to arrive at the ideal formulation and process. As fun as the single-strain Brett experiments that I’ve done in the past have been, mixing strains is where things tend to start getting interesting! 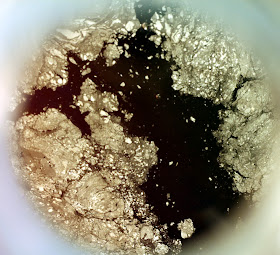 Stir-plate starter made the morning of, 2L with two Saison III and one Saison Blend.

4 g of CaCl to 8 gallons of pre-boil filtered DC water.

Mash pH measured 5.6 initially, so we added 2% acid malt. Should drop it to 5.4 at room temperature.

Added 4 g of CaCl and 1.5 tsp of phosphoric acid to 8 gallons of filtered DC water for the sparge.

Chilled to 78 F and pitched the starter. Very clear wort, left a gallon or so with the trub behind.

Pitched a half bottle each of 100% Brett Nanus and Naardenensis into one third of the batch, two Bootleg Biology Pithos isolates into another third, and dregs from a Dark Saison IV into the final third.

Placed at 68 F to begin fermenting.

The DS4 version ended up being one of my favorite batches of funky saison!
The Mad Fermentationist (Mike) at 8:28 PM 13 comments:
‹
›
Home
View web version