Some beer nerds talk as if the only hoppy beers worth drinking are from the West Coast. It is hard to argue that anyone brews better hop focused beers than Russian River, Alpine, Lagunitas, and Ballast Point. However, there are a number of great East Coast beers that are nearly as good. While they are still packed with hop bitterness and aroma, they tend to have a bit more malt flavor than the West Coasters. Recently I got to drink an Alchemist Heady Topper and a Hill Farmstead Edward next to each other. Despite the differential between their alcohol contents, I though both beers had similar balances of bright American hops noses with a subtle bready malt. 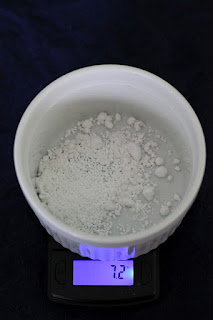 It is also the time of the year for one of the more established East Coast hop bombs, Tröegs Nugget Nectar. As much as I enjoy it fresh, the high finishing gravity (1.018 by my measure) means that Nugget Nectar tends to fall off quicker than drier IPAs. The residual sweetness is in spite of a grist that contains no crystal malt (the color comes from darker base malts - Munich and Vienna). I decided to brew a batch loosely inspired by it, but drier and with a unique hop bill.

When I posted my tips on brewing better hoppy beers a few months ago, Shaun Hill (of Hill Farmstead) chimed in on the blog's Facebook page to suggest that, in addition to sulfate, he thinks using chloride is key to treating the water he uses for hoppy beers. He wouldn’t give me his specific target, but I decided to try increasing the chloride in my water. I never understand why some homebrewers talk about the ratio of sulfate to chloride for water treatment. Having a beer with 10 ppm sulfate and 5 ppm chloride will not have the same character as one with 200 ppm sulfate and 100 ppm chloride, even though both have the same 2:1 ratio. After diluting my tap water to bring down the high level of carbonate, I added 8 g of gypsum and 3 g of calcium chloride. This yielded approximately 145 ppm sulfate and 60 ppm chloride. Don’t treat your water without having a decent idea of what minerals are already in it. 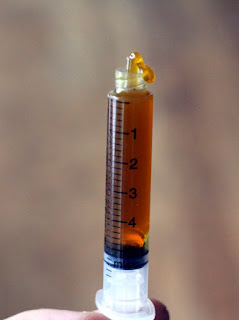 Many breweries (Russian River, Surly etc.) use hop extract to bitter their hoppy beers for both practical and flavor considerations. Hops suck up wort, lowering your efficiency and adding cost (but on a homebrew scale, who cares?). Some brewers also claim to taste the chlorophyll extracted from a large bittering charge contributes a grassy or vegetal off-flavor. I used hop extract in my Pliny the Younger clone, but it was not the sole source of bitterness. Northern Brewer suggests that 1 g of their HopShots, boiled 60 minutes, will contribute about 10 IBUs to five gallons of wort. I decided on 8 g at 60 minutes, with no other hops added until flame out. I'm interested to find out if it contributes a noticeably different character to the beer, and if it tastes as bitter as I expect for 80 IBUs.

The aroma hops were a bit of an experiment. I fell in love with the unique fruity character of Nelson Sauvin in my first attempt at a Micro-IPA. This time, rather than pairing it with Amarillo, I added Ahtanum and Simcoe to see how Nelson works with a bolder citrus hop character. Otherwise the process was very similar to those I’ve used on hoppy beers in the past. 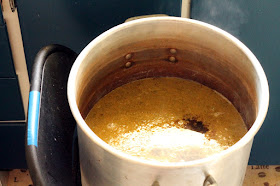 Filtered DC water cut with 50% distilled. Added 8 g of gypsum and 3 g of chloride for the entire 10 gallons of prepared liquor. Aiming for ~90 PPM Calcium, 145 Sulfate, and 60 Chloride.

8 ml of HopShot extract added to the kettle for bittering.

Half of the flameout added for a 30 minute hop stand. The rest were added at the start of the chill.
Chilled to 64 F stirring constantly. Strained to remove the bulk of the hops. Oxygenated for 60 seconds with pure O2. Topped off with ~.3 gallons of spring water to reach 5 gallons. Pitched the decanted starter.

Left at 63 F ambient to start fermenting. Good activity by 24 hours. Ambient temperature rose slowly to around 70 by the end of the second week.

3/23/12 Bagged and weighted the dry hops, and placed into a keg. Flushed twice with CO2, then racked the beer in. Purged the head space twice, then left at room temperature for dry hopping. At 1.016 (77% AA, 7.1% ABV) the beer was slightly sweeter than I intended, although that may have also been because the bitterness was a bit lighter/smoother than I wanted.

4/19/12 Great tasting hoppy beer. Could use slightly more bitterness, say 10 ml of hopshot, and could be a few shades darker. Otherwise it is just a matter of tweaking the hop profile based on what direction I want to take it.