On a muggy summer evening there aren't many beers that are more refreshing than a cold low-alcohol lager.  The clean yeast character (lacking the fruitness of an ale) makes lagers easier to drink in quantity and means they don't lose as much from a sub-40 F serving temperature.   Apparently my batch of second runnings session lager was too refreshing; we went through it in just three weeks, way faster than I was expecting.

The wort for this beer came from the same mash as the English barleywine that we brewed for the anniversary of DC Homebrewers.  So it was ironic that the keg kicked while I was trying to fill a growler for the July "session beers" meeting (luckily I still had enough to fill a bomber).  Luckily I've still got a few gallons of Czech Pils on tap to get me through the rest of summer. 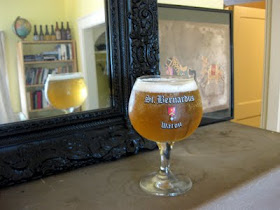 Appearance – Slightly hazy, pale yellow body that supports dense white foam. It had been brilliantly clear, but this was the end of the keg (I'd neglected taking a picture until after it kicked),

Smell – Herbal hops and toasty malts, very clean (no diacetyl or sulfur).  The aroma is restrained at first, but grows bolder as the beer warms.

Taste – Has a firm minerally hop bitterness, that is crisp and clean. Nice classic noble hop flavor balanced with the bready malt, although it doesn't have the sweetness that you'd associate with the malt profile.  Despite the complaints I've heard about the dried lager yeast I used, S-23, the fermentation character is really clean (I don't get any of the fruitiness that other homebrewers report).

Mouthfeel – Certainly thin, but not harsh or grating. Medium-high carbonation adds to the spritzy refreshing overall feel (almost like some seltzer water was mixed into a standard lager). I always think that second runnings beers are a bit lighter than their OG/FG suggests, but I'd love to do an experiment to see if there really is a difference.

Drinkability & Notes – Really great hot weather beer, super drinkable, but not lacking character.  This is the sort of beer that might convert a macro-drinker (although the bitterness might stop some people).  I really should brew lagers more often.
The Mad Fermentationist (Mike) at 9:56 AM