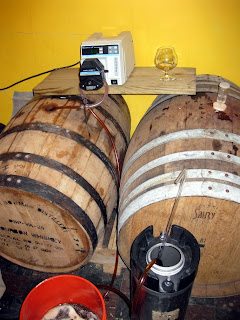 After 10 months in our group's funky bourbon barrel, the flavor of the Stout Porter was getting close to where we had hopped.  The oak/booze character was much mellower than the Wee Heavy's (which got the first dip); gone are the big wood and coconut notes, replaced with more subtle tones of vanilla and spice.  The roast character is subdued as well, and with the gravity still at 1.014 it isn't too thin/dry (which was my biggest concern at the outset).

With our old pump man (Noah) moved to Colorado, Tim brought his new (used) peristaltic pump.  It has a few advantages compared to the homebrewer "standard" March pump.  A peristaltic pump does not need to be primed, and it does not touch the beer (other than the special $5/foot tubing it requires).  The tubing can't handle high temperatures though, so it wouldn't work for moving wort around in the brewhouse.  AJ used a similar pump in his lab when I was visiting him to analyze the alcohol content of an ice concentrated beer.

We bottled the porter with 120 g of corn sugar for each five gallons of beer (actually it was for every 41 lbs of beer since we were using a high capacity scale to measure it).  That amount of sugar should get the beer to 2.0-2.2 volumes of CO2.  Carbonation on the low side seemed like a good idea for such a rich, complex beer.  We also added a total of 10 g of rehydrated Champagne yeast for the 40 gallons of bottled beer to ensure rapid carbonation. 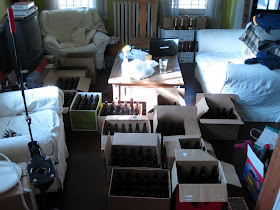 For the most part we used standard cap-able 12 and 22 oz bottles, but we gave the corker a workout with enough 750s to give one to everyone.  I also had a few 375 ml bottles I'd saved from old Lost Abbey and Russian River beers that I saved for myself.  Instead of using the Champagne corks that Nathan and I had used a few times in the past we went with Belgian corks that seemed like a better fit for the bottles. 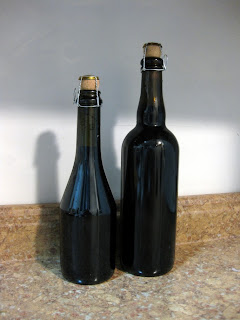 I racked half of my share onto 2 lbs of sour cherries I had purchased at the farmers market, and frozen, last summer.  Nathan racked 4.5 gallons of his double share onto 4 lbs of Cabernet grapes.  The combination of dark fruit, roast, and sour should make for some very intense and interesting beers.  Bullfrog Brewing had a similar combination in their Black Cherry Bomb (which I've heard good things about, but haven't gotten a chance to try). 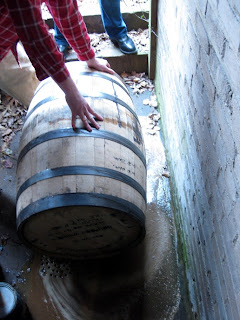 With all of the porter racked out we decided to give the barrel a rinse before filling it back up for a third time.  After two years filled with beer there was a considerable amount of trub/yeast at the bottom and stuck to the sides of the barrel.  This buildup could lead to off-flavors (from autolysis), and might also block the small amount of oxygen that usually diffuses into the beer through the wood.

Many sour beer breweries put their barrels though intense procedures to clean them; Cantillon agitates barrels filled with hot water and pointed chains to remove any beerstone; Rodenbach manually scrapes their large oak tuns every couple batches to expose fresh wood.  We didn't want to kill the microbes since they had done such a great job on the first two beers, so the water we used was only 150 degrees (the microbes can be a quarter inch into the wood so some should have survived).

The recipe for the third beer into the barrel was based on the one we used for the Wee Heavy, just dialed down to a lower original gravity.  Again we used Tim's pump to help move the beer from the carboys, kegs, and buckets to the fermenter along with an auto-siphon.  One gallon of leftover porter was pitched back into the barrel to ensure some microbes were ready to work. 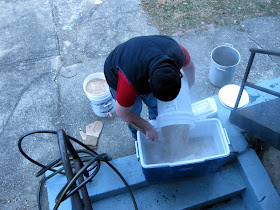 Subbed in 2 oz of light roasted barley for 2 oz of the chocolate malt.

1/15/11 Racked to the barrel after rinsing it out with hot water to remove the crud.  Filled nearly to the top, not expecting an aggressive fermentation since all of the beer had been fermented out.

3/25/12 Bottled, aiming for medium-low carbonation with wine yeast. Racked one of my shares (~4.5 gallons) onto about two pounds of previously frozen sour cherries I picked up at the farmer's market last summer.

8/30/12 Bottled the portion that was on cherries with 2 5/8 oz of table sugar and 2 oz of medium density Brett Brux Trois slurry.

10/25/12 Tasting notes on the clean version. Couldn't be happier with this one, bright fruity, malty, wonderfully rounded.

10/23/13 Tasting notes on the cherry portion. It is as good as the plain version, but with the fruitiness of the fresh sour cherries adding their own character (while lightening the malt and barrel characters).
The Mad Fermentationist (Mike) at 8:50 PM