A Baltic porter with some smoked malt and flaked rye was the last in my series of four beers with Wyeast's Kolsch strain. I drew inspiration from a alder wood smoked porter I brewed a couple years back, and a Scandinavian Imperial porter I brewed four years ago.

The plan was to brew something that had a big smoke character; the aroma is there but despite 6 lbs of Weyermann smoked malt the flavor isn't as strong as I was aiming for.  One of the big problems with using commercial smoked malt is that the flavor it imparts fades as it ages (and there is no easy way to know how fresh it is).  Now that I have a smoker, once the weather gets nicer, I'll find the time to put it to use on a few pounds of malt . 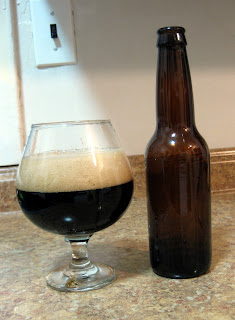 Appearance – Deep brown, bordering on black. Held at a angle some amber light shines through. The big tan head exhibits good retention, lasting almost till the bottom of the glass. Nice looking porter.

Smell – Woodsy smoke, hints of bacon/sausage (but not nearly as strong as something like a Schlenkerla). There is a freshness to the aroma, it has a hint of herbal hops, and lacks those dark fruit flavors that I've come to expect in a big dark beer. Some dark chocolate comes through, but it isn't what I would call roasty.

Taste – Smooth mellow coffee/cocoa roast. No harsh or acrid roasted notes, the dehusked Carafa really did a nice job. The smoke seems less intense in the flavor than it was in the aroma. Sort of a bitter-sweet balance, it may not stay that way as it ages and the bitterness drops off (we'll see). The kolsch yeast did a good job keeping clean and out of the way, not as fruity as it was in the lower gravity beers.

Mouthfeel – Full body without being syrupy. The flaked rye really adds its character here. Moderate-low carbonation, just the way I like a big/dark beer.

Drinkability & Notes – For a relatively young (about 4 month old) high gravity beer it is nicely rounded and mellow. The smoke has come out more as the beer sat in the bottle for a couple months and cleaned up. It isn't as rich or complex as I expected, but that may come with a bit more age.
The Mad Fermentationist (Mike) at 9:46 PM