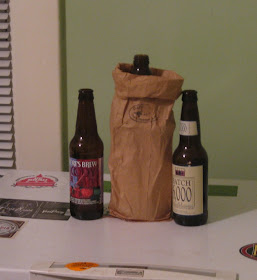 I realize this blog primarily documents my homebrewing and fermentation exploits, but I’m also a passionate craft beer consumer. Craft beers often inspire me and gives me the chance to see how flavor combinations work before brewing a 5 gallon batch of something I won't enjoy. There are such a great variety of breweries out there that focus on different types of beer (which is terrific). It is great to live in a country where different breweries focus on German lagers, English ales, Belgians, sours, super hoppy beers, or create beers of their own styling.  Near the end of his life Michael Jaskson said, "The U.S. is the best place in the world to be a beer-drinker." I couldn't agree more.

There are however a couple of craft breweries that need to cut the crap and put the beer first rather than brewing beers based on a stupid gimmick (ingredient or process) or just a catchy name (that is what the Macros do best).  Beer should be about the sensory experience primarily, not the story. My problem isn't “extreme” beer,  there are plenty of crazy beers that I love: Sanctification, Canadian Breakfast Stout, Bon Chien, Abrasive… powerful, complex beers that still put flavor first.  Brewers should make decisions based on what is best for the beer, not the marketing.

The beer that prompted this post was Genesis 15:15 from He’Brew, a beer made with 15 malts, 15 hops, and fermented to 15% ABV (Edit: plus pomegranates, figs, dates and grapes...). To me it’s like a restaurant marketing their new meatball by saying it has 30 ingredients (but not what they are) and half your fat for the day.  Adding more malts and hops doesn’t lead to a more complex beer, it leads to a muddled mess unless you know exactly what you are doing. Bell’s took a similar approach with Batch 10,000 but added an additional 100 malts and 50 hops. On a certain level they get some credit for doing something so over the top (especially as an homage to homebrewer’s cabinet cleaning recipes) but I can’t imagine that they decided on that recipe because they thought it would make for the best tasting beer.

Dogfish Head is probably the poster child for this junk. Beers like Sah’tea, I imagine the thought process was something like: "Why don't we take a traditional Finnish style (Sahti) that is almost extinct, double the alcohol, and add tea masala because the name of the style sounds like tea…"  They built their reputation by tweaking beers with one weird ingredient or technique (Chicory Stout, 60 Minute etc…) it seems like now they are just brewing things that will either be cool to show on Brew Masters or get written up in the New York Times.

Short’s Brewing certainly deserves a mention as well, since this sort of garbage makes up half their portfolio. They do everything from Bloody Beer (all the flavors of a bloody Mary in beer form) to Key Lime (with limes, gram cracker, and marshmallow – I don’t even think there are marshmallows in key lime pie…). One of this year’s new releases is a cream ale with pistachios (Pistachio Crème Ale), does anyone think that sounds like something they want a case of?  The best beer I've had from them was barrel aged Sustenance (which was unintentionally sour).

This isn’t just an American problem (although we are the ones who started it). European breweries like Brew Dog (all those 30%+ ABV ice distilled beers), Mikkeller (1000 IBU, Black), not to mention some of the weird stuff exported from Italy/Belgium that they can't sell much of locally.  It seems like even more of a shock in Europe where there are centuries old breweries that haven't expanded their recipe portfolio beyond a handful of styles.

I’m not saying that I haven’t had any good beers from these breweries, just that I tend to avoid them unless I’ve heard good things about a particular beer. I think recently there has been far too much buzz about one-offs, collaborations, weird ingredients, and market driven ideas. Brewing something new is a lot of fun, but making great beer takes refinement and fine tuning that it is impossible to get in special one-batch-only releases.  With so many great beers fighting for shelf space I can understand why cramming in yet another pale ale into the market won’t cut it, but many breweries would be served well by focusing on improving their core brands and seaonals rather than releasing zany one-offs.


There are some breweries that really seem to get it, Firestone Walker, Russian River, Jolly Pumpkin, Great Lakes, Surly, Cantillon, and Troegs (to name just a few). They experiment, but they do it the right way, experimenting quietly (either with a tasting room, or local keg/bottle releases) with flavor first beers that strive to be balanced and drinkable first and foremost. Their beers are not always great (although sometimes they are), but they are rarely bad, and all of them seem to be getting better and more consistent as time goes on.

I think similar advice is valuable for homebrewers. You can try to brew some wild stuff if you want (and you should), but always focus on the flavor of the beer rather than using an interesting technique or ingredient for its own sake.  Brewing is a craft, it is about process, technique, ingredient selection, as well as experimentation and recipe design.
The Mad Fermentationist (Mike) at 6:39 PM