Awhile back I started a thread over on the Rate Beer forums to talk about my Dave Clone (a beer that I freeze concentrated), but it broke out into an argument over how much alcohol it REALLY contains. Normally you measure the gravity (density) of a beer before and after fermentation with a hydrometer and use a formula to tell you how much alcohol there was produced, but with freeze concentration this method doesn't work because there is no way to know the effective original gravity.

After it became clear that no one really knew what the ABV was, I looked into getting it tested professionally to settle the argument. White Labs wanted $75 to run the test, which did not seem worth it to me. After talking to a couple of my nerdier friends to get some ideas I was directed to AJ deLange, the local brewing science guru. I had been over to his house last year for a talk he gave on brewing water as part of a BJCP class and was impressed (to say the least) with his huge brew system (yes that is an extra kettle for doing decoctions), tricked out lab, and command of brewing science. 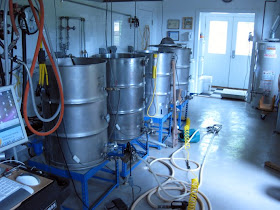 I was hoping he had some simple do-it-yourself solution to figuring out ABV, but instead he invited me over to do the full ASBC Method test (which he just so happens to have all the equipment for). The first step was to measure out exactly 100 ml of the beer. To do this he put the beer into a flask which was placed into a circulating water bath to get it to exactly 20 C (the flask has a line that indicates exactly where 100 ml of 20 C liquid comes up to). 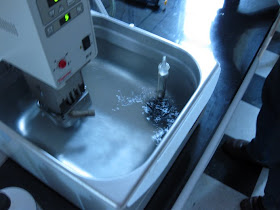 The testing rig consists of a heater (blue, top center) to boil the beer, a water jacketed condensation column (glass center), and a a 100 ml flask packed in ice to catch the distillate (it was placed below the condensation column on the scissor jack). 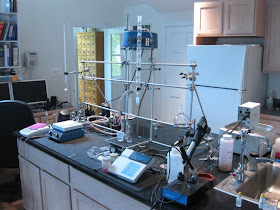 It took about 80 minutes to evaporate most of the beer, collecting basically all of the alcohol and most of the water (and leaving a thick syrup behind, but more on that later). AJ said it went faster than any other beer he had done this on (alcohol evaporates easier than water). 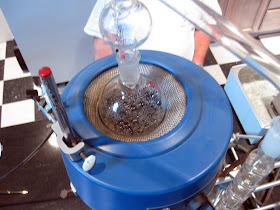 He assured me that the small size of the system (still) and its lab use make it legal. The distillate had a light toasted aroma, but as it was the product of a true distillation (unlike my ice concentration) it was illegal to drink. 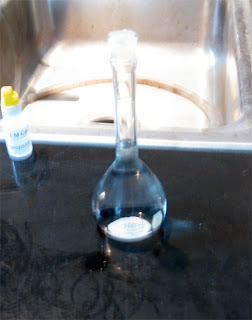 This clear alcohol/water mixture was then heated in the water bath to 20 C. 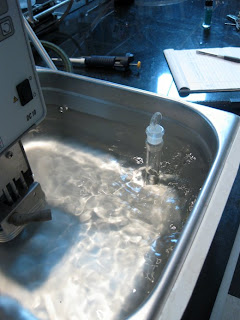 AJ used a pipette to top off the flask with deionized water to get to exactly 100 ml (which gave us a solution that contained basically all of the alcohol from the beer, but with none of the sugars). 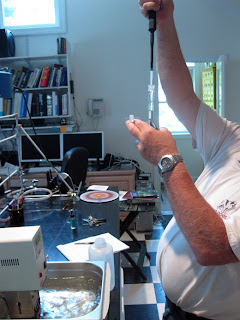 He then ran the diluted distillate through his Anton Paar DMA 5000 density meter (on the left) which actually does the analysis. The gist of the system (as I understand it) is that a pump (on the right) moves the liquid into a U tube where a magnet vibrates the liquid, the resonance allows the density meter to ascertain the density of the liquid, which in turn allows it to determine the alcohol by volume (since the liquid is composed of water and ethanol and the densities of each are known). 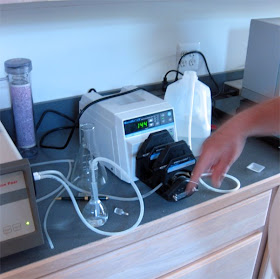 The verdict (after several trials to ensure we had all the water washed out of the tubing), 17.5% ABV (aka 35 proof). Not bad, but not quite as strong as I assumed it would be.

AJ then took the little bit of dark syrup that was left behind in the boiler, and did the same steps (20 C water bath, topped off with deionized water, and analyzed). This was the opposite of the previous test, all the sugar/dextrins from the beer but none of the alcohol. 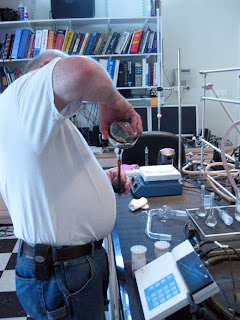 The results? Nearly 17 P (1.069) of residual real extract. This is the amount of sugar that remained after fermentation/concentration without taking the alcohol (which has a gravity less than water) into account. This may even be a bit low since a bit of sugar had burned onto the flask. This is about the same amount of sugar that my Smoked Imperial Porter had before fermentation... wow. 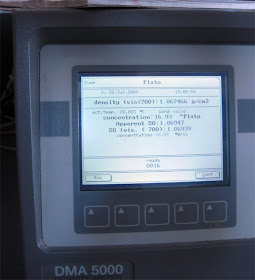 Next he ran the ice concentrated beer (un-distilled) through the testing system (since this one did not have to be diluted to a specific volume he just used a mini-plunger to load it into the density meter). 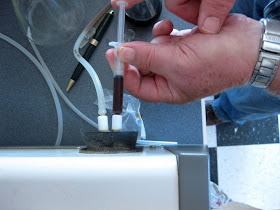 The apparent FG was pretty close to the 1.049 I had measured with my hydrometer (correcting for the fact that I measured it at close to 32 degrees). 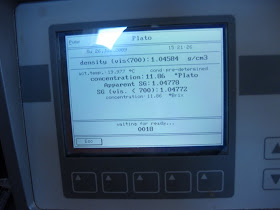 What all of this means is that despite increasing the FG by 2.08X (from 1.023), the freeze concentration only increased the alcohol by 1.75X (from 10% ABV) (so in this case the freezing selective concentrated the carbohydrates over the alcohol). Not too bad for a home freezer and a sieve. It also means that my effective OG for this beer is 1.173 (a real monster) with 73% apparent attenuation.

During a break in the action AJ took a few minutes to figure out the SRM of the beer. The first step was to dilute it (which took a 6X its volume in deionized water to get the beer pale enough for the test to work). 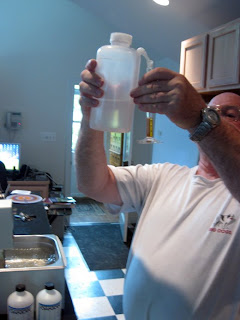 The diluted beer was placed into a small cube and then into a spectrometer which shot light through the beer ramping up the wavelength in nm increments to figure out the absorption across the visible spectrum. 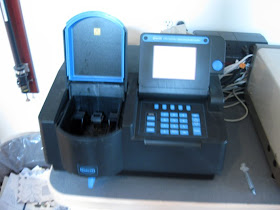 AJ then took that output and did some Excel magic on it to figure out it is 93 SRM (aka midnight black, although AJ has measured an English stout more than twice that dark), with plenty more specifics to give a complete definition of the color (SDC1 0.217, SDC2 -0.108). SRM only measures the absorption of light at 430 nm, so it doesn't really give you a full picture of what color the beer is (red, brown, gold etc...). AJ figured out what colors to make the cards that the BJCP started giving to beer judges a year ago, so he knows a thing or two about beer color. 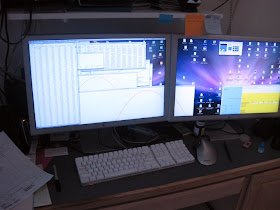 On top of the sweet brew system, and awesome lab (substantially better equipped than any we have seen so far while visiting pro-breweries for BrewLocal), AJ has a walk in cooler with taps coming out of the wall. 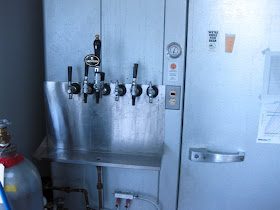 We celebrated a successful round of testing with a couple of samples from said taps, AJ's Kolsch (crisp and clean), his Pils (beautiful bright hop character), and his Irish Dry Stout (on Nitrogen). Guess which one that is? 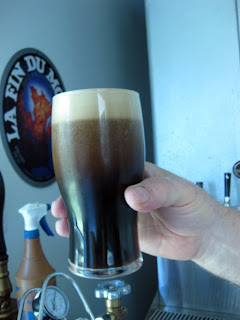 The Mad Fermentationist (Mike) at 7:16 PM