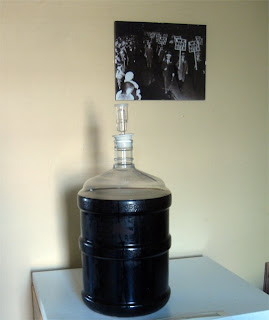 With our Bourbon Barrel Wee Heavy getting close to its boozy/oaky destination the barrel crew set about deciding what would be next into the barrel. Plenty of ideas were thrown around, but something close to an Adambier was decided on, but we wanted to do something closer to the German origin of the style than Hair of the Dog's Adam (which I was happy about since I had just brewed a clone of it).

We decided to make the beer based on a sort of amped up Alt called a doppelsticke (literally double secret). The group decided on a base of German Munich malt, with some of the same smoked malt that is used in Bamburg Rauchbier, along with some Caramunich and Carafa for sweetness and color. A solid bittering hop addition with no late boil additions (any hop aroma would fade long before it climbed out of the wood we conjectured). Fermentation was by German Ale yeast, which is clean, but accents the malt more than clean American Ale yeast.

Sadly after most of us had already brewed the new batch, the wee heavy started tasting a bit fruity.... then a bit funky... then a pellicle appeared. I think the big oud bruin (as we are now calling it) has a good chance to turn into a tasty beer in a year or so, but that left us without a home for the Smoked Doppelsticke. After a few fruitless calls to local distilleries we decided to each take our portions and bottle them with or without oak as we say fit. Mine is still cold conditioning at the time being without any oak at this point (I'll decide what I want to do with it after it has a bit more time to mellow, right now it is pretty clear, pleasantly smoky, and very malty). 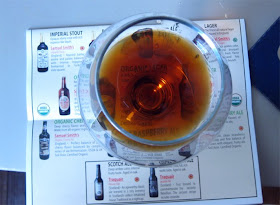 Picked up the sparge with 180 degree water 12 hours later. Really slow runoff. Pre-boil gravity 1.068, much higher than I expected.

Chilled to 75, gave 60 seconds of O2, then racked onto the yeast cake from the Oat Pale Ale. I would have liked to get it cooler, but my ground water was at 72. Placed into the freezer set to 60, put a blowoff tube on.

8/9/09 Bottled with 3.375 oz of table sugar. Aiming for 2.5 volumes of CO2. 3 bottles got bourbon soaked oak cubes that had sat in grade B maple syrup for a few days (something like Founders Canadian Breakfast Stout)