My Palisade Oat Pale Ale is another low gravity batch not to any particular style, that is to say a second International Session Ale. The malt bill is close to that of a special bitter (but it has oatmeal) the yeast is German, and the hops are American. It was inspired by a can of Surly's Bitter Brewer, but really can't be called a clone (it has different malts, hops, and yeast).

I had never used special roast malt (similar to biscuit or victory), palisade hops (a new-ish higher AA% Willamette replacement), or a clean German ale yeast (White Labs 011 in this case), so this is a bit of an experiment as well. All I was just looking for was something crisp and refreshing for the summer without any residual crystal malt sweetness. I was hoping that the oats and the lower attenuating yeast would fill out the mouthfeel without making it too thick or chewy.

This was the starter batch for a smoked doppelsticke that is still cold conditioning. It was originally going to be barrel aged, but those plans were scrapped after our Bourbon Barrel Wee Heavy grew a pellicle and started tasting funky. 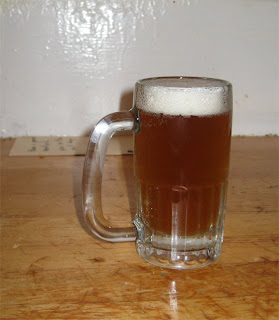 Appearance – Pours a ruddy straw yellow. The beer is clear when warm, but at about 40 degrees the chill haze is very apparent. Nice tight white head with moderately good head retention. A protein rest or some longer cold conditioning would help take care of the haze, but I don't really mind it.

Smell – The aroma is nicely hoppy with some herbal notes back up by a bit of spice. The character certainly leans European, but there is a hint of that dank Columbus flavor that reminds you that it is grown in the Pacific Northwest. Behind the hops there is a hint of bready malt, but it is hidden beneath the pungent hoppiness.

Taste – Nice assertive clean bitterness at first, flowing similar hop aromatics from the nose. The malt is more noticeable in the flavor, giving flavors of bread, saltine, and biscuit. The finish is dry which enhances the hoppiness, I think I made the right choice leaving the crystal out of this one. The yeast is very clean, but it provides a hint of fruitiness that you wouldn't get from Chico.

Mouthfeel – Medium-light body, but that is to be expected from a 4.5% ABV beer. The carbonation is subdued which prevents the beer from coming across as too thin.

Drinkability & Notes – Holds up to its session beer roots, easy to drink on a hot DC night. Not much I would change on this one, if you can't get your hands on Palisades then Willamette, Glacier, First Gold, or East Kent Goldings would be good replacements (pretty much anything would work for bittering).

Added 2 g of gypsum to the boil to help accentuate the hops.

Cooled to ~70 degrees, 45 second shot of O2, pitched a fresh tube of yeast, put into the freezer set to 60 degrees. After 20 hours there was no action, so I upped the temp to 65. After ~6 more hours there was fermentation starting.

5/31/09 Fermentation seems to be about finished, just a small bit of krausen hanging on.

6/06/09 Racked to a 3 gallon secondary, added the dry hops in a muslin bag. Gravity down to 1.008. Does not have as much bitterness as I was aiming for. Bottled one bomber with 3/4 tsp of cane sugar (this bottle was nice after 2 weeks, but I was glad I dry hopped the rest since it was missing that nice fresh hop aroma).