With the fun of getting the wine barrel Flanders Red going still fresh in our minds we decided to get another barrel to fill the second slot of the barrel rack (for symmetry). My friend Tim was able to pick up a bourbon barrel for us, so the the only question that remained was what type of beer to fill it up with.

After some vigorous debate wee heavy won out and a recipe was agreed upon. Instead of relying on the traditional method of kettle caramelization we decided to go with some Munich and melanoidin malt for breadiness and some crystal 90 for caramel sweetness. We kept the hops (25 IBUs @ 60 minutes) and yeast character (1056/1728) to a minimum to help showcase the malt.

We decided to go with a more standardized recipe this time compared to the free form Flanders Red because we won't be able to hide a muddled flavor behind the funk. Unlike the sour beer we decided to have every batch of the wee heavy fermented out before it was racked into the barrel to ensure that it doesn't sit on too much trub while it ages. 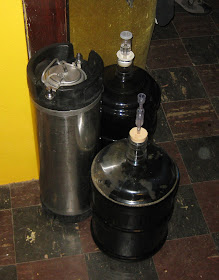 It was interesting to taste everyone's, brewed and fermented, batches side-by-side. They were all similar, but there were some noticeable differences in the levels of toastiness, caramel, body, and bitterness. The resulting blend was good, but a bit mild. Hopefully the oak and bourbon will add complexity while the oxidation caused by the small amount of air that permeates the wood will increase the dark fruit character. 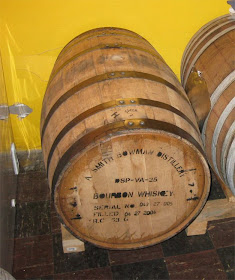 The barrel is from the only bourbon distillery outside of Kentucky, A. Smith Bowman in Fredericksburg, Virginia. They are the makers of Virginia Gentleman among other moderately priced liquors. I would have liked to have gotten my hands on a freshly dumped barrel from Kentucky, but living in DC we went with the best option available. The 53 gallon barrel had a big boozy nose and looked nice and charred on the inside. 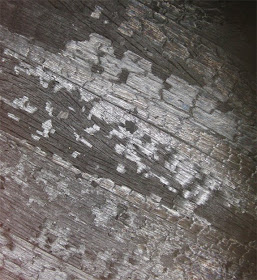 The projected 55 gallons brewed was exactly the right amount of beer to fill the barrel to the brim (which took about 90 minutes even with two auto siphons going). There is one more batch being brewed that will be used to top off the barrel as the beer slowly evaporates. After sitting for an hour some beer forced its way up into the blowoff tube bringing with it a small fragment of the charred oak from the inside of the barrel. 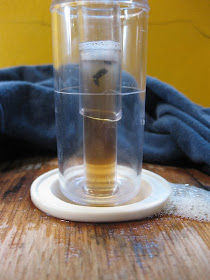 I am a bit concerned about infection on this batch for a couple reasons. The barrel sat empty or with just a bit of water in it for a few months, it is hard to know what microbes might have moved in during this time. With so many people blending batches (even with a crew of experienced brewers) that just one infected batch will ruin the whole thing (although every batch tasted clean to me). The final concern is that the bourbon barrel will be sitting with just a thin piece of aluminum foil separating it from the wine barrel (which is by now teaming with funk). We considered adding some campden tablets to ward off infection, but in the end we decided to just roll the dice and hope for the best.

We're not sure how long it will take in the bourbon barrel to get to the flavor we want, but most commercial breweries who do this sort of thing seem to age 3-9 months. We are still debating what beer to put into the barrel next,Doppelsticke, Adambier, Russian Imperial Stout, and English Barleywine have all been suggested. With how boozy the barrel smelled I think we might need to get moving on the next beer soon to make sure it is ready before the wee heavy gets too much barrel character.

Extended the boil the get better efficiency.

Added 2 lbs of malt extract (my mash tun wasn't big enough for 18.5 lbs of grain) to the final running to dissolve.

Aerated then pitched onto most of the yeast cake from a batch of Hoppy Brown Ale. Good strong fermentation.

2/05/09 Racked to secondary and added 1L of bottled water, still about 2L short of a full 5 gallon carboy.

Topped off with boiled/chilled water. Gravity down to 1.028.

3/17/09 Great aroma out of the barrel (caramel/vanilla/malt), but the beer itself has yet to pick up much wood/bourbon character. The beer has cleared considerably, but still tastes "young."

After a couple months the beer started to taste a bit fruity, then a bit sour, then like a cross between an oud bruin and an old ale. I think it is delicious, but it certainly is not a wee heavy any more, details here. Luckily the base beer wasn't too far off a high gravity oud bruin, so we added some additional dregs and gave it more time. After 9 months in the barrel it had an amazing depth, complexity, and firm lactic acidity.

3/20/10 We bottled 45 gallons with corn sugar and champagne yeast, aiming for 2.2 volumes of CO2. A bit more bourbon character than I would have liked, but it should be great once it carbonates.

That is so pretty though, huh?
The Mad Fermentationist (Mike) at 7:15 PM