Here is a fun little mini-mash batch I did to kill time while brewing a Foreign Export Stout (still waiting for carbonation). This is one of those ideas that I thought sounded great, but that I really did not want to end up with a case of if I was wrong.

The real challenge on this recipe was to try to balance the flavor of the base beer along with the pumpkin, spices, cocoa powder, and vanilla. I went lighter on each one than I would have if I was just making a pumpkin beer, or a chocolate beer, but I was really shooting in the dark because I had never used many of these ingredients together. I was pleased with the way it came out, maybe next year I will do a larger batch.

There is a good deal of debate in the homebrewing community over whether or not pumpkin needs to be mashed, or if it can simply be added to the boil. For my only other pumpkin beer I roasted a sugar pumpkin, took the skin off, pureed it, and added it to the mash. Not only did this get me my one and only stuck sparge but also didn't yield much pumpkin flavor in the finished beer. The disadvantage of adding the pumpkin straight to the boil is that the starch it contains will not be converted to sugars like it would be in the mash. However, Libby's Pumpkin Puree (fresh would be similar) contains about 2 oz of starch for every 3 lbs, so it isn't a huge amount. 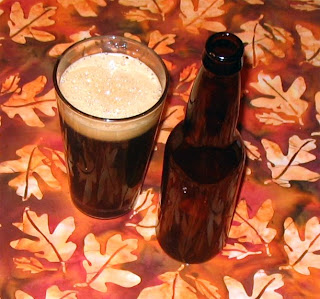 Appearance – Nearly opaque pitch-black, but dark brown edges when held up to the light. The head is light tan and thin, but a thin ring of foam stuck around for the duration.

Smell – The spices, nutmeg and ginger, are the most prominent. There is a whiff of chocolate muffins following that up as well. After my nose gets used to the spices I also get a hint of toastiness and roastiness from the porter base, with some creaminess (similar to a milk stout).

Taste – Again the spices lead the way, but they certainly are not over the top. There is a bit of pumpkin/squash flavor as well. The chocolate is rather subdued, but I definitely get it in the finish. Pretty good balance between the different elements, but a bit more chocolate would probably work well. No hop bitterness to speak of which leaves it a bit sweet, but I think the sweetness compliments the dessert elements.

Mouthfeel – Full body with medium-low carbonation, just what I was aiming for in a fall beer.

Drinkability & Notes – Pretty tasty, and easy to drink because of the balance. I think the unfermentables in the malt extract do a good job contributing to the body and sweetness. I like it more than the “standard” amber-pumpkin ale concept.

The base beer was based on Denny Conn's BVIP (Bourbon Vanilla Imperial Porter), and the concept was inspired by Midnight Sun's Imperial Chocolate Pumpkin Porter.

Steeped the grains in cheesecloth in 1 gallon of ~155 degree water. "Sparged" the bag with the final runnings from my Foreign Export Stout (you could use water if you don't have any final runnings sitting around).
Gravity from grains 1.013 in 1.75 gallons. Added DME before boil started.

Pumpkin added to the boil at 15 min remaining.

Cocoa powder and spices rehydrated in a bit of wort and added for last 3 minutes of the boil.

Chilled down to 74 and put into the chest freezer at 55 degrees.

Waited 4 hours, then aerated and pitched yeast from my Pale Brown Porter.

10/29/08 Bottle with 1/2 tsp of demerara per 12 oz bottle. Tasted alright, chocolate was the most prominent flavor at bottling.
The Mad Fermentationist (Mike) at 7:24 PM