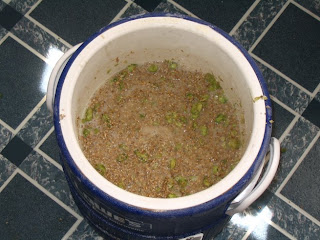 For most of my brewing the hop shortage isn't too big of a deal, when you are only using .5-1 oz of hops in a batch it just doesn't effect you that much. Luckily when I heard that the shortage might be coming last fall I stocked up on hops from Fresh Hops and Hops Direct, as a result I decided to be a bit wasteful and do an IPA at the end of March.

This recipe is a bit strange in that it had no hops in the boil. I added hops at just about every other stage though, to the mash and sparge, first wort, flameout, and dry hop. Normally first wort hops are added as the wort first runs out of the mash tun and into the boil kettle, and they are left in until the end of the boil. What I did was to add them in a muslin bag and then pull them out with tongs at the first sign of the boil. What is the point of all this? The huge amount of hops in the boil for most American IPAs can lend a bit of a vegetal flavor to my palate. By adding hops early the alpha acids are extracted before the boil, and then isomerized by the boil after the hops have been removed.

This was also only the second time I have fined a beer with gelatin. It was amazing how quickly the beer went from murky to brilliant, just 24 hours at 45 degrees. According to Vinnie from Russian River the more yeast you are able to get out of suspension before adding the dry hops the more contact they will have with the beer and thus the more effective they will be. Here is a great pdf from Vinnie on Brew-Monkey where he outlines 10 tips on how to brew better hoppy beers.

The malt bill is pretty simple, mostly Golden Promise, with a bit of malted wheat and carapils. I intended to buy "regular" carapils which is very light, around 2L, but instead I accidentally bought Munton's Carapils which is 20L. This mix up isn't a big deal, the beer is still very light in color and sweetness. For hops I used all whole hops, Amarillo and Simcoe, I find them both to be very smooth which further enhances the drinkability I was looking for.

2 g gypsum added to filtered DC water for the mash, same for the batch sparge.

Collected 6 gallons of 1.044 wort. Took the first wort hops out just as the beer started to boil.

Dissolved/hydrated the nutrient and .5 tsp of irish moss in water before adding it to the boil.

Gave the beer 45 seconds of oxygen. Pitched half of the starter I made for this and the Smoked Porter.

Set freezer to 62 to keep the fermentation temperature in check. Fermentation was active by the next morning.

4/02/08 Upped temperature to 67 to help the fermentation finish off.

4/04/08 Still has a nice thick krausen, only down to 1.020. Hopefully will drop another 6-10 points before it is finished. Solid moderate bitterness and a great hop flavor.

4/10/08 Fermentation seems to be over, dropped temp to 50 in preparation for adding gelatin.

4/11/07 Dissolved a packet of Knox gelatin in 1/4 cup of cold water, then mixed in 1/4 cup of boiling water. Added it to the beer and stirred/swirled gently to distribute, then chilled to 45 in the freezer to encourage precipitation of the yeast. Within 12 hours the beer was noticeably clearer.

4/12/08 Transferred to secondary and added a marble-weighted hop sock with the dry hops. raised temp to 60 to promote aroma extraction.

5/10/08 Scored a disappointing 26 at the SoFB, but I think it turned out as a very hoppy/drinkable IPA. The main complaint from the judges is that it isn't hoppy enough, and that the hops that are there aren't right for an IPA.

5/12/08 Tasted as part of the Alternative Hopping Basic Brewing Radio Episode.
The Mad Fermentationist (Mike) at 9:07 AM 1 comment:

Does most of your homebrew get kegged or bottled?

Looks like most people are in the mostly bottling camp with me. I bottle everything, some day I'm sure I'll get a kegging setup, but I like the flexibility of bottling enough that I will always bottle many of my beers.

Things I like about bottling: Allows me to have a huge variety on beers on hand, it's cheap and simple, they are easy to transport, and it is easy to do small quantities for split batches.

Things I hate about bottling: Cleaning bottles, filling bottles, and the occasional problems that come from carbonating high alcohol beers.

Here are some pictures from a night last week taking the labels off about 5 cases of commercial bottles. I soaked the bottles in hot water and generic OxiClean for about an hour, then scraped off the labels with a knife, and took off the glue with a Brillo pad. 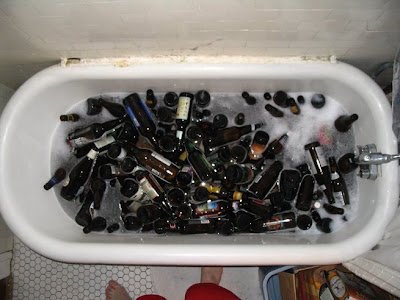 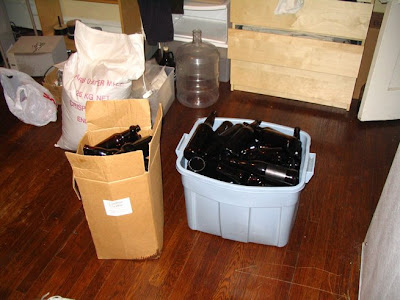 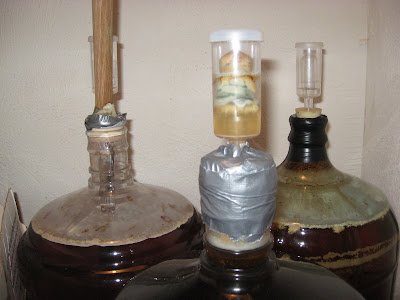 Last year about this time my mother took some pictures of the sour beers I had aging in my old room, this year she did it again.

In the photo above are the three sour beers I have aging in my parents' closet. From left to right you can see my Flanders Pale Ale (half of which will be bottled in August with the other half getting some fruit, probably Pluots ala Russian River Compunction), my Cable Car clone (my mother is graciously cleaning the airlock shortly), and my Lambic (which is going on two years old and will be partially bottled in August and have the rest blended with some fruit and give a few more months of age).

The photo below is a closeup on the pellicle reforming on the Lambic. You can see the bigger chunks that are remnants of the old pellicle which fell which I was transferring the carboy from one room to another. 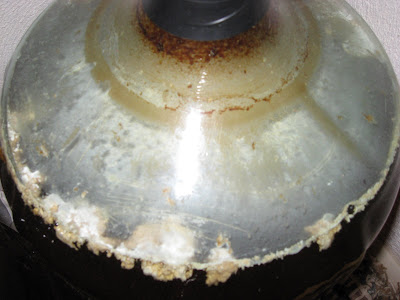 Recently I have had the pleasure of trying three fantastic beers which were both more than 10% ABV and influenced by Brett and/or bacteria. In each beer the microbes and barrel aging smoothed out the rough edges that often plague “big beers” and added unique flavors that really set them apart from their “clean” counterparts.

It started with De Dolle Oerbier Reserva 2006, a special version of their regular Oerbier aged in wine barrels with microflora that took it from its original ABV of 9 up to 13. The flavors are a spectacular balance of rich malts with cherry funk and subtle acidity.

Next came a taste of an experimental Brettanomyces inoculated version of Barrel Aged Millennium at Old Dominion. It tasted like Gale’s Prize Old Ale on steroids, huge malt backbone with an earthy old leather Brett character to die for. I will be very happy when this one eventually gets released as a packaged beer. I must say that from what I have seen Old Dominion is really stepping up their game since being bought out by Costal/Bud.

Finally came the massive Abbaye De Saint Bon-Chien 2005 from Swiss brewer BFM, the funk was not as strong as the other two, but the malt flavor and thick mouthfeel made it one of the best cold weather sipping beers I have had. At 15% ABV it is truly a massive beer unlike any other funky beer I have tried.

These three drinking experiences have done what all great beers should, inspire me to brew something similar. I have not figured out exactly what recipe I am going to go with, but I think it will be something like an Oud Bruin combined with an Old Ale and ramped up to 1.110 or so.

Now that the Roeselare Blend is back from Wyeast I will probably use that to do this beer, but only after growing it up a couple of generation or to shift the microbe balance more towards the lactic acid bacteria (which can reproduce faster than yeast). The Flanders Red I made by adding the blend to the secondary is very tasty and drinkable, but up against a beer like La Folie it doesn’t have nearly enough acidity. For a big beer it is even harder to get much sourness as the high level of sourness and proportionally increased hopping can inhibit the souring microbes.

At least one of the generations before the big sour beer will be another Flanders Red. Currently, my friend Scott and I are planning on brewing a couple batches of Flanders Red that we will eventually blend together. The idea is to age a few batches varying things like the oxygen permeability of the storage container, amount of oak, microbes, etc… Then after 12-18 months we will taste all of the batches and blend them accordingly.

Here is a draft of what I am considering fermenting with a second or third generation slurry of Wyeast's Roeselare Blend. The malt extract is just there to boost the gravity above what I can fit comfortably in my mash tun.

D2 Candi Syrup added at the start of sparge.

Chilled to 80 (took an hour due to warm tap water). Put into freezer at 60 degrees. Pitched yeast/funk cake from Flanders Red (US-05 and Red Poppy) after 5 hours in the fridge. This increased the volume and reduced the gravity slightly. Gave it a light shake to get O2 in, but not too much as there are loads of yeast cells, and Pedio hates O2.

6/18/08 Fermentation began to slowdown so I upped the temperature to 62.

8/20/08 The alcohol has mellowed considerably, but there are still almost no sour/funky flavors. This one still needs more time, hopefully the high ABV has just slowed the microbes down and not stopped them entirely.

1/24/09 Has really picked up a nice lightly oxidized, dark fruit character since my last tasting. Still at 1.020, so I pitched some EC-1118 champagne yeast. I'll bottle this batch once the yeast has a chance to do what it wants, about a week.

6/14/09 Still no carbonation, so I rehydrated a pack of Premier Cuvee from Red Star (14-16% ABV tolerance) in a 1/4 cup of warm/filtered water. Added a few drops to each bottle, then recapped. Hopefully the yeast will provide carbonation, but not eat any of the residual dextrins (which could lead to bottle bombs).