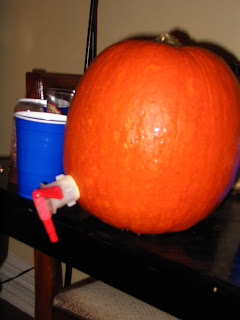 Inspired by recent talk of mashing and fermenting in a pumpkin I decided instead to take the easy route and serve some commercial pumpkin ale out of a pumpkin.

I took a standard pumpkin, cut the top out scraped out the "guts" like I was getting ready to carve it. I cut a small circle in one side of the pumpkin and then screwed in the spigot from my bottling bucket, it took some extra scarping to get the nut screwed on the inside. I then chilled the pumpkin for a few hours in the refrigerator. I filled the pumpkin with a selection of pumpkin beers (Post Road, Dogfish Head, Saranac, Buffalo Bills, and Smuttynose). Amazingly it worked without leaking and the blend of beers actually tasted pretty good.

I really don't think serving from the pumpkin added much flavor, but it really enhanced the appeal of the beer to the "non-beer" people at the party. The key was to get both the beer and the pumpkin as cold as possible so that the maximum amount of carbonation remained in the beer. 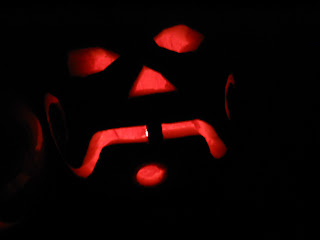 As a plus when the beer was finished we got to carve the pumpkin. I gouged out the eyes and nose and a more artistically gifted friend carved the mustache.
The Mad Fermentationist (Mike) at 5:25 PM