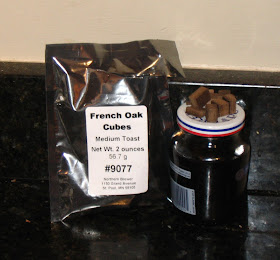 Oak is the biggest trend in American Craft Brewing, everyone from Allagash to Russian River to your local brew pub is throwing something in a wine or bourbon barrel. There is no reason that you can't get the same caliber results as home with just a the right oak, some planning and some time.

The jar in the picture contains Makers Mark Bourbon and 2 oz of Heavy-Toast American oak cubes most of which that are going into a Scandinavian Imperial Porter (Munich malt, plenty of roasted, specialty, and cara malts along with licorice root, heather honey and cardamom).

I’ve used oak beans/cubes both soaked in wine or liquor and plain. To me both soaked and not they give similar results (I think time, wood origin, toast level and ratio of oak to beer are much bigger factors), either way I boil them for a few minutes first to sanitize and leach out some of the tannins. American oak is stronger than Hungarian which is stronger than French. The darker the oak is, the stronger the contribution to the finished beer will be (time, and ratios kept the same) will be.

I have heard nothing but bad things about the easier to find oak chips (shavings). They have so much surface area that their flavor gets infused within a week or so, which prevents you from tasting the beer and transferring it before the oak gets too intense. I have seen other products such as oak spirals and oak strips which look like good ideas, but I have not tried either yet because the cubes are so easy to use.If you soak the oak in a spirit or wine for a short period of time all you are doing is causing the oak to absorb a small amount of the liquor which will them be carried into your beer. I doubt you are doing much damage to the cellular structure of the wood in a few weeks as some people suggest, particularly when most wineries reuse their barrels multiple times before they get rid of them and almost all brewers prefer second hand barrels because of their mellower character.

All that being said, if you are looking for a spirit/wine character in your beer you would be better of blending it directly into your beer. Doing this is actually illegal for most commercial brewers, so I look at the barrel thing as really just an end-around the long arm of the ATF. I do think you can get a hint of flavor and mellow the oak character slightly by soaking it in another liquor before adding it to the beer, but I've never done a test to see if this is really any better than just adding the oak and a little of the other liquor directly to the beer.

Certain beers, particularly those with Brett like La Folie or the tremendous barrel aged beers from Russian River (Temptation, Beatification, Supplication), benefit from the slow transfer of oxygen through the wood. However, there are risks involved as acetobacteria also loves using oxygen to turn your alcohol into vinegar. So oak cubes are more appropriate for beers that you just want oak flavor in (although Brett can metabolize some of the caramelized wood sugars, so it isn't useless if you don't have the effort for a more complex system).

A few weeks back (while brewing a Scotch ale with a few buddies that is now sitting on medium-toast French oak beans that were soaked in Cognac) I broke out a bomber of a straight forward English Barleywine (Just Maris Otter, EKG and Windsor yeast that my buddy Jason and I brewed) that had sat on 2 oz (for a 3 gallon batch) of medium-toast French oak for 2 months. At bottling a year ago the beer was rather harsh, with a strong tannic quality. The beer has mellowed nicely since then, and while the oak is still a strong component it now contributes pleasant notes of vanilla, caramel and toast. Several of the homebrewers I shared the bottle with swore that there was a little bourbon or whiskey in there. How well this beer came around has caused me to reconsider how much time/oak I will be adding to beers in the future.

I recently bottled a couple of beers that had been aging on smaller amounts of oak (.5 oz of wine soaked oak in an Old Ale with Brett C and .25 oz bourbon soaked oak in both secondary and tertiary in a Cherry Belgian Dark Strong with Brett C and Orval dregs) for around 9 months. These beers both ended up with a moderate oak quality that seamlessly blended into the beer. It is hard to tell exactly what qualities come from the oak and what comes from the beer itself (I don't pick up much of the liquor in either one). I think the larger quantity for a shorter time gives you a character which is more identifiable as oak, but that tastes more layered on than integrated.

I have a 3 gallons of Russian Imperial Stout aging now on ¾ oz of oak for a few months, I hope this combination of time and amount will give an oak character which is both distinct and integrated into the beer.
The Mad Fermentationist (Mike) at 9:08 PM