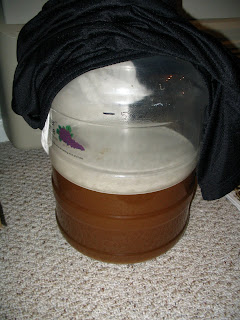 Well here it is, my first batch fermented with nothing but wild yeast (well at least it used to be wild before White Labs got ahold of it, stuck it in a test tube and sent it to me).

Brettanomyces (Brett) was originally discovered and recognized as an important flavor contributor in the late 19th century in barrels of Stock Ale in England. Since then it has been identified as an important component in beers such as Orval, Rodenbach and any Lambic you can name. It has the ability to break down some long change starches that (Saccharomyces, brewers yeast) cannot. But despite this advantage it is slow moving and thus generally relegated to scavenging the scraps left over after the primary fermentation.

Thus came the idea from breweries like Pizza Port and Russian River, "Why not let Brett take the lead and ferment a wort of its own?" Not only did these two breweries prove their point that Brett can be used as the sole fermenter but also through their craftsmanship they proved that it could make some outstanding beers. Pizza Port was first with Mo' Betta Bretta which used Brettanomyces claussenii and got an acidity boost from having a portion of the wort soured by lactobacillus while the rest of the wort boiled. Russian River used bruxellensis and lambicus along with lactobacillus in the fermenter.

My batch was inspired by a comparative yeast test done by a homebrewer named Sebastian on the BBB. It uses Brettanomyces claussenii, descended from that original strain found in stock ale and the least funky of the Brett strains. It is known for being more fruity and less goaty than the two strains more common in Belgian breweries bruxellensis and lambicus. It was also fermentened with ambient temperatures in the low 80s, which is much higher than you would ferment almost any brewing yeast with the exception of the Saison Dupont strain.

12/16/06 Decanted and pitched another pint of starter

1/19/07 Put starter into fridge to crash out remaining yeast for brew day.

Batch sparged and collected 5 gallons of 1.029 (67% eff) runoff. Not sure why I keep getting crap efficiency on low abv beers.

I subbed in sterling for the Chinook, I just don't want that harsh bitterness.

Pitched around 80 degrees and left in an 82ish degree room. Gave the fermenter a few quick shakes over the first 18 hours, wanted some oxygen, but too much increases the acidity a lot. By 20 hours from pitching a 1/4 inch krausen had formed.

1/23/07 After getting to a 3/4 inch krausen by day 2 the Krausen has pretty much fallen except for a dark scummy layer. Not sure if that will fall soon, or a pellicle will remain indefinitely.

2/17/07 Down about 1 point to 1.009, getting really nice and fruity. Looks like there isn't much more fermenting to be done, should be ready to bottle soon.

2/19/07 Added a couple of grams of US-56 dry yeast to one of the jugs. I wanted to add it a few days before bottling in case it was able to eat a point or two of sugar that the Brett could not. I want to see how the traditional yeast affects the carbonation process and if it will alter how the beer ages.

2/22/07 Bottled, in two weeks I will crack some bottles and see if the batch that got US-56 got carbonated faster and if it tastes any different.

2/25/07 Got impatient and took out a bottle of the US-56 spiked batch. Moderate carbonation, very fruity. Still not very tart, and the yeast made it taste muddier than it had the last time I tasted it.

3/3/07 The straight Brett batch is pretty nicely carbonated. The flavor is great, lemons, lightly tart, clean, fruity. Pretty clear until the second pour when the yeast gets stirred up (Brett doesn't flocculate as well as most Saccharomyces). Should be really good in another few weeks once full carbonation is reached.