There are some brewers who see almost all of the possible drinkable beers neatly fenced in by established styles. Most on a continuum like mild, to brown ale, to porter, to stout with no spaces between. The only places not bounded by styles being the willful targeting of gaps, for example a Pilsner dyed black (and even then that’s just a schwarzbier...). I see much more fertile ground where new styles and recipes are waiting to spring forth!

One of my favorite ways to come up with unique beers is to imagine what sort of recipe the brewers from one country might brew if they wanted to make their own version of a style from another country. A few examples have been my Scottish Stout, New Zealand Saison, and India (American) Wit. This isn’t as silly as it might sound because Flemish red, Munich helles, schwarzbier, and American pale ale each grew from brewers taking a style from somewhere else and adapting it to their local ingredients, equipment, and tastes! 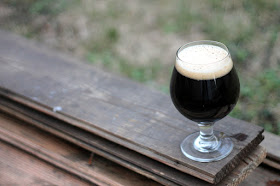 This batch is the big brother to tmavé pivo. It was from the same mash, but had a higher proportion of first runnings, a longer boil, higher bittering rate, and a cool rather than cold lager-yeast fermentation. It is my re-imagining of a Baltic porter brewed by a Czech brewery!

Appearance – Not as pretty as the tmavé, head retention and chill haze are worse. Luckily it’s a dark beer which means it's still pleasant on the eyes, but I’m not sure how two beers from the same mash and fermented with the same yeast could differ so much.

Smell – Clean malty aroma. Fresh spent coffee grounds, whole wheat toast, and some caramel especially as it warms. No hop aroma. Yeast comes across clean despite a mid-60s F fermentation temperature peak, in line with the baffling Brulosophy experiments (the third of which I participated in).

Taste – Flavor is similar to the aroma, that Munich-like (Weyermann Bohemian Dark) breadiness comes through, but a little less rounded than the classic flavor of bock and dunkel. The roast is subdued even for a Baltic porter, coffee ice cream, milk chocolate, and subtle dark fruit - more plum than raisin. Drier than I expected it to be, maybe thanks to the good attenuation and the more substantial bittering charge. Again, a clean fermentation behind all of that malty goodness.

Drinkability & Notes – A pleasantly substantial speciální tmavé-porter 18°! I will say it doesn’t exhibit the depth and complexity of my favorite Baltic porter (Les Trois Mousquetaires Porter Baltique), but it also isn’t nearly that strong at 6.8% ABV compared to 10%. The Czech influence comes in in the softer palate, less assertive roast, and firmer bitterness.

Note: adjusted the amounts above so that this recipe could be brewed as a single batch.

5 g CaCl added to the filtered DC tap water for the mash. Started with only Bohemian grains. Added specialty malts as I heated to the second Sacch rest to ensure conversion, but reduce intensity/astringency.

11/7/15 Into a flushed keg and into the fridge at 60F for the slow ramp-down. Looked pretty yeasty and there was a dense persistent krausen. 1 extra liter into a growler with 1.25 tsp of sugar.