I’m not a frequent wine drinker. While I don’t mind the flavors of a big red wine, they have a tendency to overwhelm my palate to the point where I can only taste three things: dark fruit, tannins, and alcohol. The New York Times had an interesting article a couple years ago on how diluting beverages like wine, coffee, and whiskey with water can help bring out subtle flavors and aromatics.

To create this wine-beer hybrid, Nathan and I aged four gallons of our red wine barrel aged sour beer on a gallon of Cabernet Sauvignon grapes (the last of a five gallon bucket). The beer dilutes the intense flavor of the grapes, which helps my palate pull out lighter and more interesting flavors usually obscured in wine by their high concentration (oddly). Unlike water though, the beer adds its own flavor, preventing the combination from tasting thin or watered down. 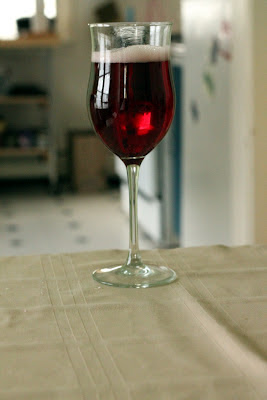 Appearance – The light pink head evaporates almost instantly leaving a beer that looks more like a rosé.I'll admit that a stable head would be nice, but it certainly adds to the vinous vibe.

Smell – The aroma is rich with grapes, but it doesn’t smell like wine. The fruit is lighter and fresher than red wines tend to be. The Cabernet gives a complex blend of aromatics, grapes sure, but also cherries and raspberries. Brett funk makes an appearance as well, with more classic leathery funk than the other version of this beer. Just a hint of vinegar is released when I swirl the beer.

Taste – Solid tangy lactic sourness, along with a big fruit character. Similar grape character and level to Cantillon Saint Lamvinus, bold, but not dominant. In the flavor the fruit comes across even more like raspberries than in the nose; I'm not sure what fruit I would guess was added. Not sure if the slightly toasty flavor is from the malt or the Brett. A wisp of residual sweetness helps to balance the acidity. The grapes mostly obscure the oak flavor, but I’m sure the barrel helps the beer taste more wine-like.

Mouthfeel – Moderate body, although it feels a bit fuller than the non-fruited portions of the batch. The prickly carbonation is just about right for my tastes.

Drinkability & Notes – I couldn’t be happier with the way this portion of the solera turned out. It is interesting that diluting the grapes compared to a wine actually brings out more of the subtle flavors from the fruit. I’ll have to buy another bucket of frozen grapes the next time I have a couple sour beers ready for fruit.

The Mad Fermentationist (Mike) at 6:36 PM