This batch started out as the second half of the same base beer that produced the Heather Gruit; the only difference between the two was that they had different flowers added at bottling.  It is amazing how much impact the flowers have on the entire character of the beer, from the appearance to the flavor.

Hibiscus is an interesting flower (sepal technically, i.e the part of the flower that isn't the petal), widely used in beverages around the equator. The most notable characteristic is the bright red color the dried flowers impart to whatever liquid they are steeped in. The flavor of hibiscus is tart and cranberry like, making it an interesting addition to either a refreshing summer beer, or a holiday beer.

The aroma from jasmine flowers are most often imparted to green tea before brewing (although I've also seen them included in with the tea leaves).  The volatile compounds are very delicate so adding jasmine as late as possible in the brewing process is a good idea.

I'm really happy with how this one turned out, but the light/fruity flavor is hard to fully appreciate while the weather is so dreary. 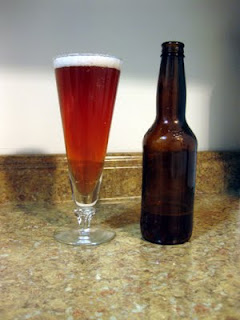 Appearance – Talk about a red ale! (Although if pushed I'd have to call it more pink than red). Almost clear, with a slight haze that will hopefully drop out with a bit more age. The head is tight/white and hangs around for a couple minutes.

Smell – Tart berry aroma with some floral aspects. The jasmine comes off slightly soapy, but the fruity hibiscus takes the lead. There isn't much of the yeast or malt character I smelled in the heather/lavender half of the batch.

Taste – Smooth and mild with a slight tartness that is only marginally stronger than the other half of the batch. This one tastes cleaner as well, it makes me wonder how much of that rustic character was the yeast and how much was the heather. Light cranberry flavor makes it really quenching. Subtle bready malt lets you know it isn't a “malt” beverage.

Mouthfeel – Medium-light body with moderate carbonation. This one could use a bit more carbonation; spritzy complements a light/crisp beer like this.

Drinkability & Notes – This will be a great summer beer (not that I'm looking forward to the hot season here in DC). The lack of bitterness makes this something that can be drank quickly, while the flowers and slight tartness keep it balanced.
The Mad Fermentationist (Mike) at 4:19 PM